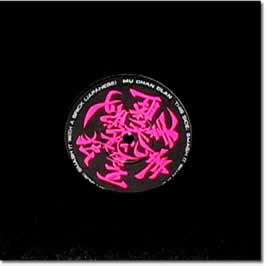 Mu Chan Clan is a new band comprising Dean (of I Monster and All Seeing Eye), Ross (of Fat Truckers), and a Japanese singer named Mu. This is their debut 7inch, and the second release on the label.

Twins Of Evil is a new label run by Dean and Jarred of I Monster. The first single on the label was 'Prince Shops At Bardwells' by Kings Have Long Arms. Mu Chan Clan play synthcore like Fat Truckers, National Bandit, or Mum & Dad.

This single has two versions of 'Smash It With A Brick' - one in English, one in Japanese. You could think of Mu Chan clan as Hi-Posi playing electropop instead of J-pop.

If none of these references mean anything from you, I can tell you that Mu Chan Clan are a female vocal band with the energy of punk, but no guitars, bass, or drums. Both sides of this single leave me wanting to hear more from this band. In fact, I want to hear more from ALL the bands I mentioned in this review!