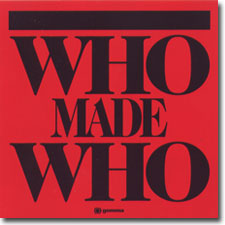 At first look you may think this CD is related to The Who, or is a reissue of the 1986 AC/DC album of the same name, but it is in fact the debut album of a new band from Denmark.

The Who Made Who sound is built on a Gang of Four guitar foundation, with vocals like Eric Clapton in Cream, finished by a disco bass/drum rhythm wrapping. You can hear 38 minutes of them live at the 3voor12 website.

The album opens with Rose, which has a bass riff kind of like David Essex's Rock On. Rose was the B-side of t he third WhoMadeWho 12inch The Loop.

Space For Rent is the second 12inch single from the disc. It contains the original version and a Dirt Crew remix. This song's vocals are very much like Cream, as are those of the opening track, Rose.

The album incudes a cover of the massive Benny Benassi track Satisfaction. It was the first 12inch single from the LP, backed with Flat Beat (not on the full length). Their version of Satisfaction appeared on two compilations that were reviewed in the gullbuy on the same day (March 3 of this year), The Glimmers, and 50,000,000 Soulwax Fans Can't Be Wrong. The WhoMadeWho version of Satisfaction is rock all the way, and is the only song on the record with female backing vocals and a cockney accent, making it sound like the band Wat Tyler.

Monkeys was mixed by Jonas Imbery (half of Munk), though there is no glittering prize to be found in the production or content of this decent but unexceptional track.

Shake Your Boat shift gears into dream pop, with harmony vocals in the style of tracks by bands such as America.

Honoring the disco roots felt in this bands music, I Love has nice cowbell and percussion action, but no disco soul. It is just another exercise in rhythm without much passion or point, and you can't even dance to it.

One of the stand out tracks on the record is Hello Empty Room, which has vocals that sound a bit like Closer Musik or Borneo & Sporenburg, with guitar that apes Gang of four's angular riffs, and a chorus out of the post-electroclash, post-Depeche Mode school.

While this review may make WhoMadeWho sound like a band you need to hear, the songs just aren't that interesting, and this record is not very distinctive or worth spending your hard won dollars on.