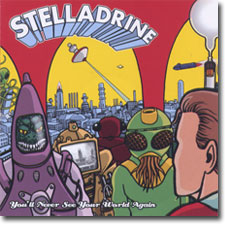 Stelladrine is the work of music artist Tirdad from Paris. His recordings sit closest to the NYC punk/electronic pioneers Suicide.

The CD sounds like the French band KG at times. Like KG, Stelladrine are rough around the edges, but the sounds are pure as a result - there is no glossing of mediocre sounds by smooth production.

Astrosurfers of Tomorrow places Stelladrine close to Russian labelmates (her work is distributed by Solzne) Messer Fur Frau Muller, or their side project Messer Chups.

You'll Never See Your World Again is a calm instrumental with a guitar drone that may remind you of Velvet Underground.

Scientists and Madmen brings Sci-Fi dialog into an electonic pulse.

The Future Isn't What it Used to be engages the listener with drama and sound, and movie dialog quotes such as:

There are no limits to the imagination, and man's ability to make reality out of his visions, is his greatest strength. Through this skill, he has been able to accomplish time and space.

The track also has lots of theremin on it.

You'll Never See Your World Again is an interesting album. I'd love to hear more of Tirdad's work - there are numerous releases on the label he runs, Mechanoise Labs.