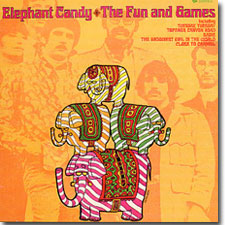 The folks at rev-ola records continued to churn out some choice reissues this past year. They did the Emitt Rhodes / Merry-Go-Round disc, they reissued a psych-folk album by Christina Applegate’s mom (Nancy Priddy), not to mention some truly excellent obscurities by the likes of Nick Garrie and the Rainbow Folly.

Delving into bubblegum territory this time they give us Houston, Texas’ own The Fun and Games. Now Texas doesn’t seem like the likely place for a late sixties pop-sike band and with songs like Close to Carmel and Topanga Canyon Road, not to mention the multi-part Beach Boys harmonies and a cover of Don’t Worry Baby you’d swear these kids grew up in the valley or some suburb of L.A. Surprisingly enough though Houston actually had a music scene back in the day. The Red Crayola, the Clique, Bubble Puppy, and Fever Tree all called Houston home.

Elephant Candy was recorded in Houston by one Gary Zekley at a place called Andrus Productions where one of the more notable Texas bands, the Thirteenth Floor Elevators had also recorded. If anything accounts for the distinctly west-coast sound that the Fun and Games had, it would most likely have to do with Zekley who came fresh off the heels of producing the sunshine-pop album by the Yellow Balloon. Zekley had also worked with Jan & Dean and had been around more than a few Brian Wilson and Phil Spector studio sessions.

The first track off the album, Grooviest Girl in the World was the only song they would chart with nationally and is an infectious pop song of the highest sugary order. With lines like, you’re a feminine portrait of grace, you’re the grooviest girl in the world, and I’m a guy with impeccable taste....ahhh. It’s laughable to a certain degree but underneath the dated goofy lyrics is a driving piano, some killer farfisa and particularly tight harmonies.

The detailed liner notes tell that the band’s vocal arrangements were hugely influenced by The Association and this is evident on tracks like Close to Carmel and Something I Wrote which feature ever so subtle sitar flourishes in the background. The standout tracks however seem to be the ones that don’t garner many comparisons to other bands. It Must Have Been the Wind is like a somber bubblegum number that collided with some incongruous fuzz guitar. The guitar lends a certain spookiness with these ethereal harmonies floating over the mix - but it works.

Elephant Candy is like a jump up and down fist pumping drug anthem which is something neither the Beach Boys and certainly not the Association would tackle. It’s uncertain what kind of drug Elephant Candy refers to but whatever it is it sounds like a lot of fun.

If you’re a fan of west coast sunshine pop, Curt Boettcher, Gary Usher, or any of the other aforementioned bands you’ll want to check this one out. Includes 5 bonus 45 versions of album tracks and one non-lp single.