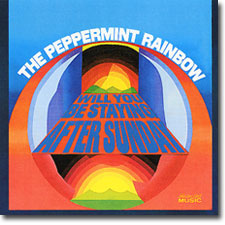 The Peppermint Rainbow from Baltimore were the ultimate 60s lounge band turned into a one hit wonder, and their album Will You Be Staying After Sunday was a perfect slice of Mamas and Papas / Spanky and Our Gang influenced pop. They were also one of a number of bands/songs named after peppermint including The Peppermint Trolley Company and Incense and Peppermint. For 60s record collectors, this album has been a hidden treasure that was just waiting for cd reissue until now.

Discovered by Cass Eliot (from the Mamas and Papas), produced by Paul Leka (from the Lemon Pipers, the American Breed and another one hit wonder in Steam's Na Na Hey Hey Kiss Him Goodbye), and with songs co-written by Leka and Al Kasha (producer of Eydie Gorme's Blame It on the Bossa Nova, the first version of It's My Party by Helen Shapiro, What's So Sweet About Sweet Sixteen? by Carole Quinn and some 70s soundtrack work), the Peppermint Rainbow followed up the Spanky and Our Gang sound with a radio friendly sound that was destined to be noticed.

It was after the failure of their first single (Walking in Different Circles, one of their best songs which is included here in the album version), The Peppermint Rainbow hit it big with Will You Be Staying After Sunday, a song that was originally intended for Spanky and Our Gang, meant to followup their hits Sunday Will Never Be The Same (a Terry Cashman/Gene Pistilli song originally offered to but not recorded by the Mamas & the Papas and the Left Banke) and Sunday Morning (a Margo Guryan song which can also be found on her album Take a Picture).

The album starts with the tremendous Will You Be Staying After Sunday, which has one of the greatest drumfills in the history of one hit wonders, a heart stopping introduction and middle, and a melody that is as catchy as it is haunting. It medleys into with If We Can Make It to Monday, which is really a brief interlude version of Will You Be Staying After Sunday played orchestrally.

Two other songs mine this same Spanky and Our Gang territory - Don't Wake Me Up in the Morning, Michael was their next single and a stab at repeating the hit formula which sadly didn't work. And the album ends with the Sandy Posey Born a Woman styled song I Found out I Was a Woman.

Walking in Different Circles was also covered by Goldie and the Gingerbreads on an Atco single, Ronnie Dio & The Prophets on a Parkway single (both in 1967), and The Elves on a Decca single in 1969 (this last one was actually produced by the songs co-composer Scott English, with vocal arrangements conducted by Claus Ogerman). The Goldie and the Gingerbreads' version was just included on the Rhino One Kiss Can Lead to Another boxset. For those not into the sound of Will You Be Staying After Sunday, Walking in Different Circles is a great lost cut worth checking out.

Early on, the group recorded the Lemon Pipers' Green Tambourine because of Paul Leka's connection to that bubblegum hit (it was included as the b-side to their first single Walking in Different Circles, with the hopes that Paul Leka could get some royalties, if their first single had been a hit), and the Peppermint Rainbow version is a commendable version worth checking out. Even better though, is the Al Kasha co-penned tune Pink Lemonade which immediately follows the one two punch of Will You Be Staying After Sunday/If We Can Make It to Monday and keeps the album going with some fine tunage.

Other good but more mellow songs include And I'll Be There, Sierra (Chasin' My Dream), and Rosemary which either have a loungey vibe or an orchestrated vocal sound that works. The only songs that don't work on the album are the one/two punch of Run Like the Devil and Jamais which both ended the first side of the original lp. Both songs have male vocals which give these two songs a more generic vibe (Run Like the Devil is upbeat angsty male vocal, while Jamais has an orchestrated French feel to it).

The Peppermint Rainbow released two more singles after their album was released - with songs You're The Sound of Love, Don't Love Me Unless Its Forever, and Good Morning Means Goodbye which sadly are not included on this cd reissue. All three songs are actually quite sweet followups on the Will You Be Staying After Sunday formula and it's a shame that Collectors' Choice Music never adds bonus tracks to their reissues. They could've wrapped up The Peppermint Rainbow story quite easily by including these non-album single tracks (and single versions of the album tracks that were released as singles, which sometimes vary slightly), but of course things are never that simple.