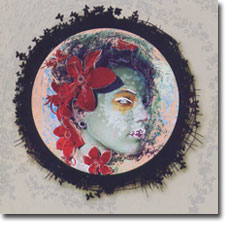 Sir Alice is French artist Alice Daquet. This is her third release, following up two EPs on Tigersushi, called No. 1 and No. 2. Most of the songs are vocal-based, with words in French.

As with her earlier EPs, Marc Collin of Black Strobe and Volga Select appears on the disc, though this time he didn't produce the record (she did).

When I first heard the No. 1 EP I thought we were looking at a new Ellen Allien in Sir Alice. The graphics gave that impression, and some of the songs matched too. However, with time her true essence has emerged. Alice Daquet is an experimental music artist. He work would sit well alongside a band such as Crawling With Tarts. At times this record reminded me of another current French artist, Stelladrine. Both artists sample sounds as the background for sound collages which become much greater than the sum of their parts.

The record opens up with Cadavre Exquis, sounding like a Kim Gordon vocal track from Sonic Youth Sister. But soon the songs goes a little further (vocally), till I hear something like the wail of Ian Hunter in the climax of Mott The Hoople's Marionette.

On Psychophase the vocals start off like a whisper. A casual listen might lead you to tag the song as "quiet, with whispered vocals." But a few minutes into the song the vocals become completely over the top, pushing the envelope into crazy-ville.

? is not a party record or a no-wave hoot. It is a tense record by an artist who seems to prefer intensity to melody, and who possesses enough technological skill to use music as a sword to help her words cut deeper.

Sir Alice in the gullbuy: