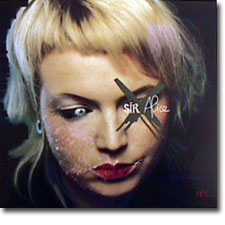 Sir Alice is Alice Daquet from France. She produced, mixed and wrote the three songs on this EP. Her voice reminds me of the 1980 NYC artist Lizzy Mercier Descloux, whose records were recently reissued by Ze Records.

No. 1 is a wonderful debut for Sir Alice. Bouda Is A Material Girl is a killer track, and the other two songs show enough of the other sides of Sir Alice to make us want to hear what ELSE she can do.

My first impression was that this sounded like it should be on Bpitch Control., and would sit well alongside the works of Sylvie Marks. Then I started think of the Mitek artist Sophie Rimheden, but (despite the photo on the cover) Sir Alice is more human than she.

The second song on the A-side is Ballad. Ballad has the same type of vocal experimentation as Patti Smith used on the stream of consciousness parts of early tracks like Poppies or Ain't It Strange.

On the flipside, Princess is a long track with a very experimental feel in the music, almost like SF duo Crawling With Tarts. There are childlike calliope melodies, and tape manipulation of other recorded music, plus passages with her almost crying. The song reminds me of an exorcising of the fairytale imagination of a young girl trapped in a bad situation.

Tigersushi is one of my favorite labels, and I know they are still on a roll when I hear new releases like this one.