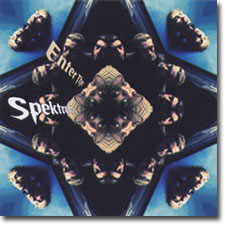 To place Spektrum in a nutshell you could say they sound like ESG with Nina Hagen singing.

Spektrum hop on the disco-punk sound so popular today, and Lola Olafisoye's voice sounds a lot like Nina Hagen. Nina has not enjoyed much popularity these days, but Spektrum encompass the best points of Nina's unique voice. They make the sound work.

Even though the band plays live and uses traditional stringed instruments and drums (along with electronics), Gabriel Olegavich’s music sounds digital clean, with the Jah Wobble/PIL fat bass sound that Playgroup recreated in 2002. The band is rounded off by Teia Williams on bass and Isaac Tucker on drums.

Lola and Gabriel wrote all the songs on Enter the Spektrum.

Breaker has music that sounds very close to ESG. The bass is way up front, and the break is solid. Spektrum are kin to Output recordings bands Playgroup and Tall Blonde.

Music Alchemy and Freefall have that bass sound and the Nina Hagen voice. They are the songs I would play people to introduce them to the band.

Listen Girl is the track that fits closest the Kellis, Missy Elliot, and Grace Jones description of Spektrum in Playhouse's site . Listen Girl is a song that I like a lot. Special mention goes to it for the whistling part which feaures prominently in the track. The site also says that the band's sound is like A Certain Ratio and 23 Skidoo, which it kind of is.

Freakbox and Kinda New were 12inch singles on Playhouse. Kinda New also had a Teifschwarz remix 12inch that remains my favorite slab from Spektrum.

I have read reviews of this record that say that all the elements are right but the final package fails to excite as much as you would think, and thought I know what they mean, I like this record a lot.

The fact that my favorite Spektrum track is a remix by Teifschwarz makes me think that the band could produce a killer record if an outside producer was brought in (this record was self-produced). But I am pretty sure that this band does not have a budget to bring in any big names. Given that consideration, the sound of this disc is pretty awesome!

Very soon Playhouse will reissue the first Spektrum LP Breaker with new mixes. Meanwhile, if you like the disco influenced punk bands like !!! or Playgroup you will want to own this disc.