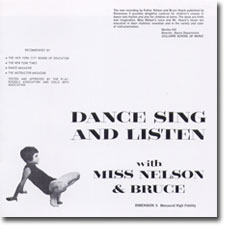 Released in 1963, Dance Sing and Listen was Bruce Haack and Ester Nelson's first record for children.

Ester Nelson was teaching dance to children in Westchester NY. Bruce Haack had just left the composition program at Julliard, and hooked up with Ester to provide accompaniment to her dance lessons.

The children like the dance class so much that parents started asking if there was anything that the children could take home with them.

Bruce and Ester recorded Dance Sing and Listen on an $8.00 microphone in Bruce's apartment. They named themselves after the dimension for the imagination that Rod Serling mentioned each week in his introduction to The Twilight Zone.

Ester Nelson had had vinyl copies of Dimension 5 records and provided them to fans (not collectors) for years in special rituals not unlike the routines on her records. I have one friend that bought the full set of LPs from her after exchanging letters with her. The condition for my friend to buy the records was that she agree to pay whatever un-named price Ester set for the LPs. That way Ester tested my friend to make sure she was not a collector looking to resell these discs as valuable artifacts.

US record label Emperor Norton put out a Dimension 5 compilation a few years ago. It was a wonderful CD that sadly reached few ears, and failed to made waves among music fans it deserved to reach. It is fortunate that the Japanese label King Records worked out a deal with Ester Nelson to gain rights to release 5 of her records with Bruce Haack on CD. During the next 4 weeks the gullbuy with feature all of these discs, with the exception of the Christmas record Ebenezer Electric.

Bruce Haack and Ester Nelson in the gullbuy: