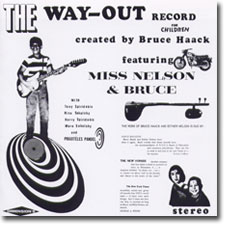 Released in 1968, The Way-Out Record for Children is a very fun record that does not show any wear for its years. Any modern musician would consider themselves blessed if they could create an LP like this.

After three Dance Sing and Listen LPs together (between 63 and 65), The Way-Out Record for Children has a much more solid sound than the earlier LPs. Bruce Haack and Ester Nelson were confident in what they were doing, and had developed a comfortable working relationship. Bruce brought in more sounds and incorporated them easily, and Ester brought in her children (Maura and Resa) to speak during some of the parts, particularly the song Mudra.

Mudra is a very psychedelic song with sitars and wide eyed wondering from the children. Motorcycle Ride has cool sounds and lots of easy to follow gymnastics - all these tracks were designed first and foremost for a children's dance class Ester taught in upstate NY. School For Robots would be a lot of fun to work with in a class as well.

About the only criticism I could have for this LP is that whenever Bruce talks the volume is really low. It sounds like he was recorded in stereo, yet pressed in mono, and his voice gets lost in a missing track. But since Bruce recorded these records himself, I have to believe the voice problem is by design, and that all is as the artist's intended on this most unusual LP.

Bruce Haack and Ester Nelson in the gullbuy: