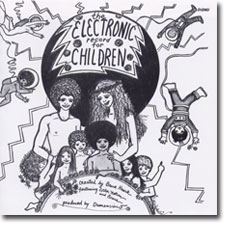 Bruce Haack's magical world of analog children's music is captured perfectly on The Electronic Record for Children originally released in 1969 and reissued in 2004 on King Records out of Japan.

Children's music from the 60s could be much different than that which has become an industry unto itself, with various works like Bruce Haack's Electronic Record for Children and Raymond Scott's Soothing Sounds for Baby. The Electronic Record for Children is the perfect combination of childish melodies, analog instruments and sound effects, psychedelic vision, and playful creativity which is like if Joe Meek had tried his hand at children's music.

The Electronic Record for Children has Bruce Haack and his partner Esther Nelson on a spaceship orbiting the earth in the songs and voice overs. With that in mind, and the fact that this is a children's record, they are not held down by any one musical genre or idea of sound. Classical Beethoven piano pieces (on Echo) where Haack shows how a piano "echoes" an orchestra followed by Bruce's own "space piano", sit side by side with bluegrass music, recitations of the presidents (forward and backwards), and stand-up comedy in the grooves of a record (on First Lady). It's that worldly perspective which permeates this album which makes for such an interesting listen for both electronic music freaks and children alike.

Bruce Haack's music is straight from the imagination, where an idea can become real simply as the day it was thought. African Lullaby shows Bruce and Esther exploring that continent, while Spiders has a spooky keyboard groove and halloween-like Cramps voice over. It's the keyboard groove and voice overs which are the only constant on this album, with a definite Brazilian feel in both the mellow relaxed grooves and tropicalia like exploration on tracks like Clapping with Katy, Mara's Moon, Dance, Poppies and Saint Basil.

Bruce Haack and Dimension 5 in the gullbuy: