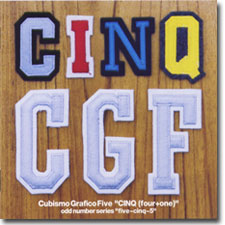 The Cubismo Grafico Five disc Cinq (Four+One) on NIW! Records, reviewed here, has Matsuda Gakuji joined by fellow J-Pop friends like Shu-ta low Tagami (TGMX), Yutaka Hurukawa (Doping Panda) - both of whom appeared together along with Cubismo Grafico on the Mosh Pit on Disney E.P. No.3: Under The Sea which featured music from The Little Mermaid - and Akira Tsuneoka (from Japanese punk revival band Hi-Standard). Guest appearances include vocals by Yukari Fresh and trombone by Hitoshi Fushimi.

Upsetters! the disc opener is a rocking little intro tune with wordless vocals by Yukari Fresh for a fine introduction. The next track Savignac sets the mood for most of the disc with pounding guitar rock and catchy pop melodies and tempo changes. So Nice is probably the best of the lot. It's a melodic song with a steel drum intro and a Cardigans sound (with male vox), a wonderful trombone solo by Hitoshi Fushimi, and the use of a wordless Brazilian tune (made famous by Astrud Gilberto) at the end. There are probably many other pop references throughout this disc but this one stuck out to me the most.

Barista is a cool organ instrumental a la Brazil's Ed Lincoln. Sweet Jamaica Sweet has a Jamaican feel of course which some might people like a lot. Shuffle Life has a dreamy pop goodness which I dig more.

Cubismo Grafico Five also do two covers - Perfect was written by Mark Nevin for his band Fairground Attraction and is done up in perfect power punk style. The set closing Jamaica Song is some pop ballad goodness written by Booker T. Jones of Booker T And The MG's.