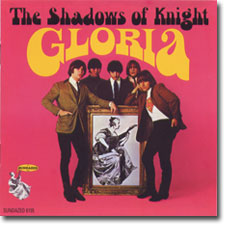 The Shadows of Knight are best known for having the US top 10 hit version of Them's Gloria in 1966, after signing with the Chicago based label Dunwich.

The Shadows of Knight were the best known group on Dunwich (other artists like The Luv'd Ones, Amanda Ambrose, and The Wanderin' Kind are featured on the two discs Oh Yeah!: The Best Of Dunwich Records and If You're Ready! The Best Of Dunwich Records Volume 2) and are heard in their prime on their debut album Gloria. Mining a Stones/Yardbirds/Animals adrenalin approach to the Chicago Blues sound, I was surprised at just how good this album sounds.

The Shadows of Knight's hip swaggering version of Gloria definitely is fitting for the American garage rock sound of the day. Commendable versions of I Got My Mojo Working, Boom Boom, Let It Rock, You Can't Judge a Book by By the Cover, (I'm Your) Hoochie Coochie Man and Oh Yeah (The Shadows of Knight only other hit next to Gloria, appear next to some fine originals like Light Bulb Blues, Darkside and It Always Happens That Way.

Each original has something to offer - Light Bulb Blues has a frantic energy like that found in Dylan inspired groups like Mouse and the Traps. Darkside is a slow blues with a great Hey Joe feel to it (and made for the name sake for the British group offshoot which featured Spacemen 3 bassist Pete Bassman). It Always Happens That Way has some great fuzzguitar.

The Shadows of Knight's first album does not mine the experimental or bubblegum sounds they would investigate on later releases (on songs like Shake and My Fire Department Needs a Fireman), but Sundazed have definitely made it an album worth a listen.