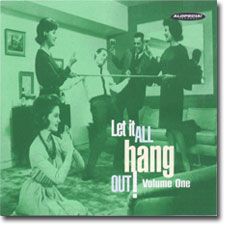 Alopecia in an English surfbeat label. this is their first compilation with vocals. On it they have chosen 20 bands from "the stix" that have "been listening to more sonics, Kinks, Link Wray, Bo Diddley, etc. than is medically advisable."

The results are awesome. I did not expect to be drawn in to this record, but I really was. I have a system where I put my favorite track numbers on a post-it with a star, and this disc has 9 star tracks.

I also have a system where I never look to see which bands are which on compilations till after I have listened several times and decided which tracks I like. That allows me to listen without prejudice. In the past I would choose which tracks I thought would be best, based on the names of bands I liked, then would be surprised when my name recognition acts wouldn't hold up to music by bands I had never heard of.

Special mention goes to The Jamming Arabs for writing a song to Dick Dastardly and his dog Muttley, from the 60s cartoon Wacky Racers. The vocals on their track remind me of Angry Samoans.

Alopecia! Records in the gullbuy:

Locked In To Surf, Part 2