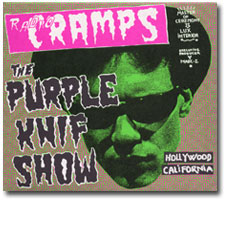 The Radio Cramps: Purple Knif Show on Munster Records is the first way to get this radio broadcast on CD in the USA of The Cramps' Lux Interior DJing on a Hollywood radio show from July 1984,as it reissues a recording first made available in a French import. It's an extremely sought after document (a copy of the '95 French version just sold at auction for $34 with 18 bids coming in for it), so it's exciting to see it available again. The Purple Knif is in reference and in tribute to Cleveland's horror tv show host from 1963-66 and former DJ Ernie (Ghoulardi) Anderson who used to say: "Stay Sick!", "Cool it with the boom-booms", and "The whole world is a purple knif" (knif being the word fink backwards of course). What works so well on this wonderful DJ mix which runs the gamut from raw 60s punk garage and rockabilly, to Polynesian jungle rhythms and jazz themes is that Lux has picked some great music and DJs in an appropriate, heavily reverbed DJ's voice. This not only enhances the whole thing perfectly, but also helps to take us back to the era of the DJ personality.

There's a lot of music here which is fitting and expected coming from a member of The Cramps with the likes of The One Way Streets (Jack the Ripper), The Swamp Rats (Louie, Louie), The Trashmen (Bird '65), Link Wray (The Fuss), The Tides (Midnight Limbo), Bill Carter and the Rovin' Gamblers (Baby Brother), The Frantics (The Whip), The Deadly Ones (It's Monster Surfing Time), and Vic Mizzy (The Addams' Family Theme).

The One Way Streets' take on Jack the Ripper is about as raw as you can get and can also be found on Back From The Grave, Vol. 1. The Swamp Rats are from Pittsburgh, PA (Lux comments how he's been there and it is the pits) and they transform Louie, Louie into a heaping slab of metal in both guitar grunge and screeching, howling vocals a la The Sonics or pre-Stooges mayhem - too bad it's only a minute long! This too incidentally can be found on Back From The Grave, Vol. 1 - but what's even more exciting is the appearance (something to keep an eye out for) of a Swamp Rats cd on Get Hip entitled Disco Still Sucks (a re-ish with perks) which just came out recently and contains their crazed 45s along with some unreleased tracks.

Lux treats us to a less heard remake of The Trashmen's Bird (here called Bird '65) which combines fuzzed out garage with their trademark bird vocals and male harmonies - nice to hear a different take on a song that has played itself out.

Link Wray's The Fuss is an obscure fuzzy instrumental probably written in response to his huge hit Rumble (as in "what's the fuss?").

The Tides' Midnight Limbo, a surf instrumental from '64 with Polynesian beat, was a b-side to Limbo Rock and can be found on Crypt Records' Jungle Exotica Vol. 2  (oddly enough, L.A. session guitarist Billy Strange is heard here with his take on the 007 Theme from his 1964 platter James Bond Theme and Others - he who also wrote Chubby Checker's hit Limbo Rock).  Earl Hagan & The Interns keeps the jungle theme going on the New Interns Watusi which has a Polynesian rhythmic workout on drums and flutes.

Vic Mizzy's Addams Family Theme is a fitting tune to hear on a Lux Interior mix and is heard here as the latter half of track 17 in a mix I had not previously heard with a sax solo break.

There's also quite a few surprises to be found on Lux Interior's radio mix - including J.J. Jackson (Oma Liddy), Ted Weems & His Orchestra (Heartaches), Ray Anthony (Dragnet), The Enchanters (Cafe Bohemian), and The 5 Blobs (The Blob). Some great music which you may not associate with the likes of The Cramps, but which helps to enlighten an already fascinating musical influence and taste.

J.J. Jackson was a huge 300 pound soul singer from the mid-1960s - here he's heard singing the frat soul found in Oma Liddy (aka Oh Ma Liddi). He was best known for his 1966 soul hit But It's Alright, but he also co-wrote Come See Me which was one of the best Pretty Things' singles (and incidentally is the name of a Pretty Things compilation cd coming out in April, 2004), as well as arranging for Jack McDuff and Jimmy Witherspoon and later appearing in the oft sampled role of a DJ in the mid-1970s movie Car Wash. (According to the cd, he was also one of the first MTV VJs).

A nice change of pace is Heartaches by trombonist Ted Weems & His Orchestra originally from 1933 - which sounds like a 40s television theme song, and was oddly enough a hit in 1947 just after Weems had regrouped his orchestra after doing a stint in the army.

This is followed up by Ray Anthony's Dragnet - Ray Anthony was best known for working with Glenn Miller and Jimmy Dorsey before leading a group in the
Pacific during World War II - before he even got around to writing the theme for Dragnet, for which I'm sure he is now most remembered.

Drummer extraordinaire Cozy Cole recorded with the likes of Jelly Roll Morton, Benny Carter, Stuff Smith, Cab Calloway, and Louis Armstrong before enjoying a hit with Topsy in 1958. Lux offers up Topsy Pt. II - a rhythmic, percussive workout on a similar theme which was compiled on 1995's Max Weinberg Presents: Let There Be Drums, Vol. 1.

The Enchanters recorded the jungle bongos/female wordless vocal led Cafe Bohemian with vocalist Garnet Mimms in the mid-'60s - and it can be found on Crypt Records' Jungle Exotica.

Lux Interior did a wonderful job DJing this set of music which no doubt inspired The Cramps. He was certainly ahead of his time in regard to how a lot of what he played on radio back in 1984 went on to be compiled in our age of the compilation. Even though the artwork is fittingly Cramps-like, I do wish Munster Records had put a little more effort into the cd artwork - which has no real liner notes to speak of, and also is a paper case which one must force the disc from when ready to listen.