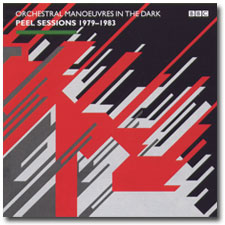 I wasn't sure that I would like this CD. I used to like OMD when they were around, but I remember them best for songs like Electricity (my #1 fave song from them, and the first thing I ever heard from them) and Sealands, a slow song that I am always reminded of because here in the US a trucking company that handles freight containers from boats is called Sealands, and has their logo prominently displayed on their trucks.

I was surprised by how good this CD is. I really like seven of the fifteen songs. The recordings are top notch, and the versions are different enough from the eventual album versions to make you really enjoy this disc.

The disc collects four BBC sessions in chronological order. The first four tracks were recorded on August 20, 1979. These are my favorites on the CD. Every one of the tracks from this session are sterling.

The second four tracks were recorded April 14, 1980. From this group I like Pretending To See The Light.

The third session comprises tracks 9 - 11. The recording took place on September 29, 1980. None of these tracks are part of my group of faves.

The last session was recorded on January 29, 1983. I like two of the three songs in this session.Of All The Things We've Made is a slow song, but it grips you as you listen to it. ABC Auto Industry is quite experimental, with the classic children's ABC song layered upon with tympani and voice samples. I hadn't remembered this side of OMD at all!

The CD includes a bonus track, the band's first single and (in my opinion) signature track, Electricity. It is the 7inch version, not a Peel Session.