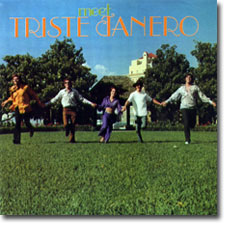 Triste Janero is a little known group who appeared briefly in Dallas, Texas in the late 1960s who released one highly sought after lp and then disappeared.

Released in 1969, Meet Triste Janero is a delightful bossa easy pop album, vastly overlooked and highly sought after for many years, which Rev-Ola has seen fit to reissue in 2004. The group Triste Jenero is the missing link between the 60s bossa pop with female vocals inspired by Sergio Mendes which extended into the 80s with such groups as Felt and The Marine Girls.

One need only listen to Triste Janero songs like the brief introduction tune A Beginning Dream to hear melodic guitar lines which would come to fruition years later in British groups like Felt. This self-penned intro song, along with the other self penned tunes found here, Rene de Marie and In the Garden are the reason Triste Janero's album has been so sought after.

Both Rene de Marie and In the Garden are a precursor to the sound which later blossomed in the UK with such groups as The Marine Girls - acoustic strummed guitars with Brazilian inspired light percussive backing and double tracked female vocals by Barbara Baines make Meet Triste Janero 20 years ahead of its time.

Augmenting these original tunes are more bossa inspired takes on tunes from the day. Triste Janero try their hand at such soft pop nuggets as Bacharach/David's Walk on By, Nilsson's Without Him, Francis Lai's Today It's You, Jobim's How Insensitive, Luiz Bonfa's Somba de Orphia and The Youngblood's Get Together.

Probably the best of the covers has to be Triste Janero's inspired take on The Lovin' Spoonful's You Didn't Have to Be So Nice which includes Triste Janero's own guitar melodies also heard so nicely in the ever so brief intro tune A Beginning Dream, with more of that inspiring easy acoustic guitar work.

The only time Triste Janero don't live up to their collectibilty is on the album closing instrumental organ jazz jam T.J. Blues where Triste Janero show their chops but also sound more generic.

In The Garden - The White Whale Story