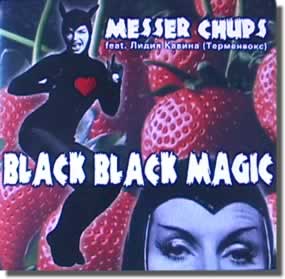 When I first ran across the Miss Libido CD I fell in love with the band. They became my favorite band of the year. They sounded like no one else, though Elektrotwist's 'La Philosophie dans le Boudoir' on Eleganz came close. Messer Chups combine a love of surf rock, plenty of theremin, the guitar of The Cramps, the lounge feel of Combustible Edison, the zaniness of Satanicpornocultshop, and an over the top feel best exemplified by Miss Libido's outstanding cover of The Trashmen's Surfin' Bird.

The problem was (is) that CDs by Messer Chups are very hard to find. Up until receiving this CD by the band (they found me through gullbuy's best friend - Google), I not not heard anything from them except the Miss Libido CD. With such mystery and unfulfilled questing after a band, the arrival of a new Messer Chup disc in my hands brought up many mixed feelings. I was practically doomed to be disappointed. People change, and bands sounds can change too. Would I still love them? Would their new disc be as strong as Miss Libido?

I have lived with Black Black Magic for over a month now, and I've got the goods on this record for you. Black Black Magic is very different than Miss Libido. It has much more surf instrumentals, tons of theremin, and less vocals and samples. But it does have plenty to recommend. I have slowly come around to this records charms. I have a method I use with CDs which is well known by fellow WZBC DJs. I put a star, then list all the song numbers which are faves after. At this time of writing I notice that I have 10 stars on a CD with only 13 songs.

The only song I don't like is Barbara Brylska Hotel. Barbara Brylska is a popular movie-star from the 70s. She is well known in Russia and Poland through her appearances in old soviet films. Maybe there is a story to the song that would make me understand it better, but without such explanation I do not want to hear a song which features a woman crying as a prominent part of it. Aside from that track, my top faves are #4, 6, 9, and 12.

Many of the track titles are in Russian. These I will refer to by number.
#4 has a bass line in the same style as the 'Historie de Melody Nelson' LP by Serge Gainsbourg (plunky bass played with a pick). There are a couple of different vocal samples including something which sounds like a fairy singing in a magical forest tale. Add a sample of the bass line from the David Essex song 'Rock On' and you have a great track.
#5 (Cat Religion) has cat sounds added to a classic surf cut. Anyone who loves cats will enjoy it.
#6 (Lo-Fi Woman) has some easy listening samples I can't identify, plus plenty of theremin and some Russian film dialog.
#7 (Black Black Magic Of Love) has a sample of a woman passionately saying 'I Love You,' plus plenty of reverb surf guitar and haunted theremin.
#8 has a fuzzed out bass and rocking drum laying down the bed for theremin and Cramps styled guitar. It almost sounds like something The Fat Truckers might have recorded.
#9 has awesome fast upright bass and cartoon sounds. The organ in it sounds just like Brother Cleve used to play in Boston band Combustible Edison.
#10 (Import Export) has the theremin cranking out a melody not far removed from the easy standard 'Moon River.' The percolating synth is very Jean Jacques Perry. The song builds into a 'Baby Elephant Walk' kind of beat.
#12 is completely Combusible Edison - I don't mean a rip off - I mean just as good as something they might have written. There is a 50's/easy vocal sample that I can't identify which puts the icing on the cake for this song. Very good.
#13 (Auf Wiedersehen Show) is the hyper closer to this disc. It is based on a dialog sample ('I may be a bitch, but I'll never be a butch') from one of the Valley of the Dolls or Russ Meyer movies. There are little pieces of many other things in it as well - I heard the goblin laugh intro to 'Wipeout' to name one.

Want to understand and love this CD instantly? Just pop it into your PC (sorry Mac users) and view the video of Go Satan Go from the Vamp Babes CD. It is quite amazing, filmed in a super 8 style and filled with the images that define Messer Chups: bright colors, zipper suited aliens and cheap flying saucers, and racy woman in tiny costumes.

Messer Chups in the gullbuy: