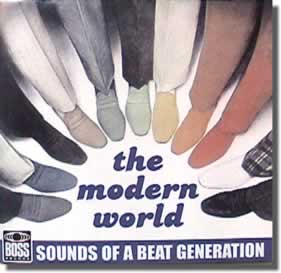 The Modern World, a 2 disc Cherry Red compilation has an interesting gimmick: contemporary pop bands using the 60s (mostly mod, perhaps some garage) as their starting point through a 21st century filter, sometimes with an 80s reinterpretation of 60s music in between. Even some of the names are mock 60s. The poster has lots of good info on the bands and 60s influenced art work. There are alot of Spanish pop bands, a familiar face or two and, who knew, multiple organ combos.

Nick Rossi Set starts off Disc 1 with a fun instrumental 'The Organiser' that could have been background music from a favorite 60s show you grew up watching pre cable or on Nickolodeon.

Barcelona's Sidonie are in the same spot on both discs and their first track here 'Feelin' Down' has a cool wicka wicka guitar sound throughout. I like the singer's presence and the band paces itself, lettin the song build nicely, especially around the chorus towards the end. They're a good find.

Art School pay tribute to the Jam not only in name, but on this track 'Stolen Soul.' It has a mid to late 'Funeral Pyre' era feel, but a looser, less structured sound. They give a respectful nod to The Jam's mod pund and later soulful sound.

Modesty Blaise sometimes come across as Wales' answer to The Monkees, (who rule of course) weigh in with a track from an earlier release 'Jennifer (& the people who married her) with some humorous musings on life in a 'Pleasant Valley Sunday' context, with all the bouncy guitars and organs you could ask for.

Motorcade 'Helium Angel' is a fun 'late 60s' mod almost rock number with some great tambourine throughout. The title is a good description of the girl in the song, lighter than air, gravity defying. The guitar part here is similar to the Big Star guitar part that The Pernice Brothers robbed on 'Monkey Suit' a few years back, but having Big Star as your jumping off point is a good thing. They could be another good find.

Four Sided Circles 'The Real Crazy Apartment' are either paying tribute to or borrowing heavily from Them/Van Morrison 'Gloria'.

Elephant Band's singer has a similar melodramatic style to the singers in those 60s rock bands like Blood Sweat and Tears or Three Dog Night and this track sounds like that late early 70s radio chestnut whose title escapes me, but you might remember the chorus '..Great God in heaven you know I love you.' Blame it on my Alzheimer's.

The Flake 'Scream Out' has a churning organ that has the feel of Deep Purple's 'Hush' which takes it out of the garage. I see lots of gyrating hips and flying hair when they're belting out this one

Stealer 'Song of Yesterday' is the first garage sounding track and it's a good addition to the mix here, given this comp's ambitions. It sounds like a lost 60s garage recording with the (deliberately?) distorted vocals way up in front of the instruments.

Los Cronincs 'Sing Yourself' also has that wicka wicka guitar sound this time mixed with churning organ. It has the feel of some of the late 60s bluesier rock bands, but thankfully not with that bombastic, headache inducing approach and the singer is quite good.

Matamala start off 'Mod With No Hair' with a good holler, but their 60s take is through an 80s filter. They have enthusiasm, odd harmonies (a good thing) a rocking sound, and on this song a funny premise. After all, where would any self respecting mod be with no hair? They're making me wonder what other good Spanish bands I'm missing out on.

Josep Barbara makes up The Pacifics and this is the first Spanish act on this comp who doesn't try to hide his Spanish accent with a fake English accent. It's a good self made recording and his voice sometimes reminds me of Ed Kuepper's rough drawl.

Les Hommes instrumental 'Big Al's Theme' has xylophone added to the organ for that extra cheesy feel. It's good fun.

Quant 'Playing with Mary' has the feel of a Shocking Blue outtake. They seem to be aiming for a way out sound with lots of effect laden guitar, sitar feedback and the driving rhythm along with some great singing. They're a keeper.

The Apemen have the right name and attitude for reinterpreting the more machismo side of 60s rock and you can take your pick of which 60s radio chestnut was their jumping off point, the rhythm is like a sped up version of 'Tax man' which the Jam also did to great effect with 'Start!' and maybe the feel of the same track that The Elephant Band borrowed from.

Supersonic 'Come Tomorrow' borrows from the more rocking side of the 60s and like other psych acts from that time mixed an unusual instrument (flute) into their sound to make it 'unique' so the hippies would groove to it.

Disc 2 begins just like the first one, with an organ combo. It has a breezier, more summery feel, if that's possible.

Pleasure Beach start things off with Carole King's chestnut 'I Feel the Earth Move' Luckily the guitars are just as upfront as the organ and there's some fun 6 string improvising in the middle of the track.

Sidonie's 'Cry' is a Beatlesque number, which I think is always better than the real thing, with a bit of the Byrds thrown in for good measure. They've found the right combination of those elements for their sound, enough jangle and none of that (forever stuck in your head whether you like it or not) sticky simplicity.

Solar Flakes 'Miles Away' has the feel of a couple of (my many) Monkees favorites, Mike Nesmith's 'Only Sleeping' and 'Pleasant Valley Sunday' It's carefree pop and their craft really shows here. I like their faux 60s name. They're also a keeper. (Fave)

Strawberry Smell sound like they used an 80s filter for their 'modern world' contribution 'Five Flakes' It has alot going for it. Their starting point comes from XTC's pop sensibility, but they're working up quite a sweat here and they're not afraid to. (Fave)

Mr. Good Guy have nice harmonies and chiming guitars on 'Sweet Apple Pie.' They're more Byrds like than Beatlesque and best of all, they're not afraid to pick up the pace for a nice little build up to a strong finish, and I'll try to get over the fake (?) applause at the end. (Fave almost)

Art School sound less like The Jam here and more like those late 60s early 70s bands (Blood Sweat and Tears, etc.) 'Flying on Love' has that dramatic type of singing, but not too much of that bloated sound. They swapped their early 80s filter for a little late 60s bombast. It's an interesting switch and they kept me guessing.

Supertzar 'Selling Sunshine' cleverly turn a couple of favorite 60s themes on their heads. I like the forceful up front vocals, the nice ahh ahh harmonizing combined with some cool organ blended with rocking guitars. The mods have entered the garage. (Fave)

Peter Colours also uses late 60s bombast for 'Great Situation'. Once again it's the same Deep Purple track 'borrowed' from the previous disc, here it's sped up, which helps because it's over with sooner.

Crowd Men From S.P.E.C.T.R.E. start off 'The India' with a snippet of dialogue from a Spanish (60s gangster?) film and launch into a groovy instrumental. It's fun to hear another non vocal track that sounds like it came from a wierd movie you saw on TV as a kid. They double organ and sitar and build on that with some guitar for an unusual and very cool sound.

Bondage 'Deja Vu' starts off with a Theremin that sounds like a flying saucer landing. This sounds like another 60s track that took a detour through the 80s. It feels like The Slickee Boys and then there's a part in it that could almost be a sped up version of Squeeze's 'Another Nail in my Heart' an interesting combination of two different but fine bands.

The Pills rock the garage again with 'Dictionary'. This track changes pace alot here and it's fun to try to figure out what they'll do next. They pace themselves well here, starting out softly, just singing, some guitar and someone tapping a drum rim. The instruments build up and come crashing in at the chorus. As they get towards the end it takes on a bit of a 'She Said, She Said' sound and feel and they get quieter towards the end, finishing off with an almost cheesy organ riff. This could be from any decade (Fave)

Watch 44 'Holding On' comes back to the 60s, but with more of a power pop feel. They have great harmonies, build nice crescendos and come across as a more rocking Byrds. Maybe it's their take on 'Feel a Whole Lot Better.

Green Circles 'Do You Sing' starts out in the garage, but I'm not sure of their source material. They briefly wander into Who 'Can't Explain' territory and go back into the garage, a better place to be.

Divine Orange are another Spanish band that aren't afraid to let their Spanish accents be heard. The singer has a strange voice and mangles syntax unlike anyone else. The harmonies are kind of scary. Their angle seems to be Sargent Pepper, but more like the lost tracks.

Spick and Span finish off this comp with 'Winter Sounds.' It feel more like a restrained 'Shaft' type instrumental with lots of wicka wicka guitars mixed in with keyboards.