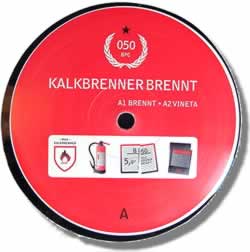 A 12 inch single by Paul Kalkbrenner on the Bpitch Control label, 4 mesmerizing tracks.

At first I wasn't too sure if I would like this single because the drum tracks have an antiquated quality to them, but after subsequent listens I really got into it. Every track has a trancey tech-house minimal feel to it.

A1 Brennt starts out with a music box and soon kicks in with a an overlaid keyboard with little variation and a midpaced rhythm, which leaves this track hanging, reminding me of stuff from the Shitkatapult label.

A2 Vineta has a clicky rhythm and a distinct keyboard melody, adding somewhat of an epic comedown. The rhythm gets doubled but we never go into hyperspeed we just keep seething.

B1 Dampf has the understated recurring pulse, and a submerged dub-like rhythm not unlike the Psychick Warriors ov Gaia.

B3 Salz & Pfeffer has the most recognizable feel of all of the tracks, less minimal and more abrasive, though still repetitive, which gives this track the most character.

All tracks are good, but Salz & Pfeffer was my favorite.