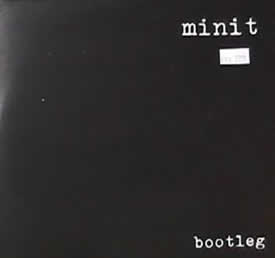 Minit are Jasmine Guffond and Torben Tilly from Sydney Australia. Tonschacht is the label that put out the last Hrvatski 7'.

This single was Tonschacht's first release. They describe Minit's music as 'dense electronic music, made with different loops and samples'.

The liner notes of the single tell us that 'Bootleg' was composed 'entirely from field recordings of natural phenomena on and around Alpsee, Bavaria. The track was originally inspired by and conceived for Chicks On Speed.'

While neither track has any moments that are even vaguely Chicks On Speed-ish in sound, the New Zealand artists Dust and Omit (with a touch of Stephen McGreevey)come to mind as I listen to this single.