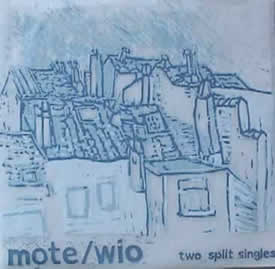 A double 7' with two split singles. Both Mote and Wio are from Belgium.

Mote had a song on a comp a few years ago (can't recall its name now) that was the standout of that comp. It sent me questing for all things Mote. Years later all I have been able to find is this very limited set on the Belgium label Ubik.

Mote share the set with Wio, a one man act that sounds a bit Elephant 6 and a bit Palace.

Mote remind me of the band Screen Prints, though Mote's sound is more Polvo-ish than Screen Prints. The song to die for on this set is Mote's 'Reggie's Glowin' (D2). This song feels a lot like Polvo at their peak. The other 2 songs I like a lot on the set are Mote's 'Church Rap' (B1) and 'It's My Heart: Trenchmouth' (B2).