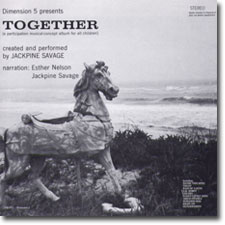 Bruce Haack recorded and released the Together album under the pseudonym of Jackpine Savage in 1971. Jackpine Savage is slang for someone who lives in the woods outside of a town and is sort of representative of how this album fits into the Bruce Haack discography. Jackpine Savage's Together album was recorded after the release of The Electric Lucifer, and around the time when he had befriended music great Raymond Scott and they were both experimenting with Scott's electronic musical instruments.

Much more an electronic pop album than the other Bruce Haack albums I've heard released under his real name and which are usually children's albums, the Jackpine Savage album Together still has a good dose of psychedelia imbued in it, even if the whole thing is a much more laidback affair. This laidback feel is what could get a lot of people to enjoy this album - it's much more an album to enjoy in the long line of electronic pop albums through the years. And in that sense it's a mini masterpiece.

The album has a much more hushed feeling to it and even when there are children's voices here, they are the voices of a shy child for instance during Intermission who can barely speak into the microphone. Esther Nelson's role on this album is also less apparent, though she does appear on one of the best tracks called Touch which has a great moment when she says "Sit on the floor, cross your legs, put your hands on your knees, close your eyes and do not think" which is then followed by a good 20 seconds of silence."

A fun thing about this album is also just how many psychedelic pop references are sprinkled throughout. Bruce Haack starts out Rain of Earth by saying "Well, this is a science fiction song about children from another galaxy who set their controls for the heart of the sun and ended up on our planet," in reference to the Pink Floyd song Set the Controls for the Heart of the Sun.

Colors has a reference with Bruce singing "In the crimson kingdom, there lived a Crimson King" set to a Joe Meek like moog oldies melody.

O.K Robot has Bruce referencing the HAL 9000 computer from 2001: A Space Odyssey, but instead of a song about a super computer controlling a space mission, the robot is told to mop the floor before a electro hoedown ensues.

For anyone interested in the psychedelic children's music movement that Bruce Haack helped develop along with Raymond Scott (which still has a powerful effect on the development and playfulness of children's music), or if you are interesting in the early electronically laced pop works of people like Curt Boettcher, Joe Meek or Brian Wilson in the 1970s, definitely check out the mini masterpiece that is Jackpine Savage's Together.

Bruce Haack and Dimension 5 in the gullbuy: