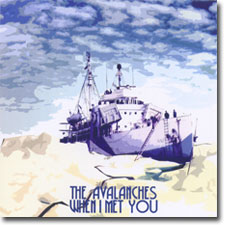 When I Met You is a 2 many djs style mix by Australia's The Avalanches. Like the Soulwax discs, the packaging is well made, but seems a step below legit. The label does not offer an address or contact info either.

But fans of The Avalanches will do well to seek this out. It is well put together and a lot of fun. My favorite way to play this is to take the CD player off 'cue' and play several songs in a row. My favorite groups of tracks to play together are 9-16, 25-29, and 30-39. The tracks with curses (if you need to be aware of these things) are 7, 8, and 24.

There are 2 tracks that I like a lot but kind of wish were left out, because they appear on similar compilations. I Can't Go For That by Hall & Oates is on Eskimo Recordings Eskimo: Various Artists and Many Others, which came out in 2000 on the Belgian label with so many outstanding mixes by the Glimmer Twins. Michael Jackson's Billie Jean is on several Soulwax records - as both 2 many djs and hang all djs. Hearing these tracks here cheapens this CD, making it feel like an imitation of these other discs.

Even though When I Met You is a 2004 release, there is no info about when it was recorded. It is a boot of a radio show. It was recorded as a breezeblock session years ago, at the same time as the other records cited above.

Read the track listing below as a curiosity, not as a track listing. Every moment of this CD is mix and changed into something different than that songs you know contain. It is not a mere mashup of one song with another song's lyrics. Instead, The Avalanches weave a tapestry using these many elements, and create a complete musical voyage that is a lot of fun to ride through.

I like this disc and give it a thumb up, despite the high price it sells for in stores.

The Avalanches in the gullbuy: