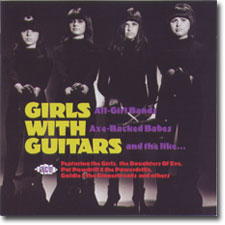 Ace Records out of the UK follows up on some other all female 60s rock cds they've issued in the past (including the cd compilation of She/Hairem music called She Wants a Piece of You). It's great to hear a modern compilation which delves into the area that is so under represented on legit cds. She and The Hairem are of course featured (Come On Along and Outta Reach - both highlights from She Wants a Piece of You) and other highlights include:

The Beattle-ettes's let it hang out Beatles response style on Only Seventeen which answers a number of Beatles tunes while also emulating Lesley Gore's beat sound.

The Pandoras' I Could Write A Book About My Baby has been collected bootlegged (on Touch the Wall of Sound) so it's good to hear this Boston area all female rock band get a legit cd reissue - they've got a number of singles worth checking out, along with this girl group gem.

The Goodees give us the southern raunchy best on their Stax/Volt inspired take on the fratboy classic Double Shot (Of My Baby's Love) singing lyrics girls weren't really singing in 1969:

What happened to me last night
That boy of mine, he loved me so right
He loved me so long and he loved me so hard
I finally passed out in his front yard
It wasn't wine that I had too much of
It was a double shot of my baby's love!

The Goodees are a vastly overlooked girl group who recorded for Stax' pop label Hip and consisted of Sandra, Kay and Judy. They released one album on Hip called Candy Coated Goodees and a handful of singles (some of which that didn't make it on the lp and which had Stax people like Isaac Hayes helping out) which is all dying to be reissued on cd.

The Daughters Of Eve are an all female band definitely worth checking out. Their tune Help Me Boy (a tune also cut by Eric Burdon and the Animals earlier in 1967 as Help Me Girl) will definitely get under your skin with its intense arrangement and sleepy girl lead vocal which reminds me of The Goodees style. You can read about The Daughters Of Eve here.

The 2 Of Clubs try their hand at the Petula Clark tune Heart - which emulates the beat of someone's heart in the rhythm changes - something so unique to 60s songwriting style and worth hearing just for that 60s southern Muscle Shoals sound.

The call and response Headcoatees like putdown of The Angels' Get Away From Me that has a slinking groove, sassy dual female lead vocals and hip organ solo. The fiery Boy, What Will You Do Then by Denise & Company will definitely fire you up with the burning harmonica and Denise's angsty lead vocals.