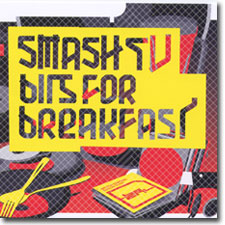 Smash TV are Holger Zilshe and Michael Schmidt from Berlin. Bits For Breakfast is their second record, the follow-up to 2002's robo-pop classic Electrified.

There is only one song that appears elsewhere - New User? is on the Hi-Jacked 12inch which came out just before this record. That is a big change form the first record, which had 5 songs culled from other releases.

Another big change can be heard in the first song, Queen of Men. The track features Raz Ohara on vocals. Smash TV are not exactly known for their vocals. When vocals appear, most of their tracks have robotic vocals with computer treatment. I guess the band noticed how good their stuff could sound when someone laid a good vocal track on top, as Barbara Morgenstern did in her excellent mix of Nobody. That mix originally came out on the Nobody 12inch, but has since appeared on several comps, including the Electric Indigo mix comp reviewed here in the gullbuy.

My favorite tracks are Queen of Men, Can't Wait To Operate, Conchord and Drop the Gun.

Queen of Men is the song I mentioned aboved with Raz Ohara vocals. It took me a while to like this track. It was such a change from Smash TV's past work that I had to digest it slowly. By after all is said this is easily thier most commercial track - it is put together well and very likeable.

Can't Wait To Operate has a floating synth line and a hint of quiet, but the robotic undercurrent that Smash TV excel at. I think the track will be very popular with Akufen fans. There is a lot of subtlety in it that I enjoy.

Conchord is a Smash TV take on disco, complete with synthetic strings. I like this song best!

Drop the Gun sounds like it could have been on Electrified. The title phrase is repeated and sound effects are played as well.

Smash TV have made a real effort to move on from the sound of their last record, and while it for the most part works, I don't love this record as much as I did Electrified.

Smash TV in the gullbuy: