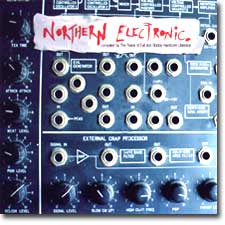 There indeed is a renaissance of synthcore electronic music coming out of the north of England and the Northern Electronic compilation is the proof in the pudding. Discograph (a French label) has collected the finest in music from the northern electronic music scene of the UK, mainly from Manchester and Sheffield. The land of Cabaret Voltaire and Pulp is a thriving scene of rocking electro tunes, and Northern Electronic is a fresh goldmine and most certainly will be one of my favorite compilations of the year. And while I could nitpick about certain tracks being included and others I would've liked to hear, they are small quibbles considering I really don't think there is a bum track here. Especially if this whole scene is fresh to your ears you won't be complaining (as it should be seeing as how most of this music was released in absurdly limited pressings). I envy those who haven't heard some of these bands: once you've heard this incredible compilation, you won't want to turn back. Artists included are Fat Truckers, Stazi, White Trash, I Monster, Kings Have Long Arms, Mum & Dad, Hiem, Dog Ruff, and Prinz Bambi.

Kings Have Long Arms (aka Adrian Flanaga) have two killer tracks with Rock and Roll is Dead and Electro Honkey. Both songs have a playful novelty factor, but include a crunch and rhythm which makes me keep playing them over and over. Electro Hockey gets the nod from me, thanks to the funky 60s inspired rhythm (electro lounge maybe?).

Fat Truckers have two songs, Superbike and Down In Motion. I'm getting bored hearing Superbike (it's been compiled quite a bit recently on International DeeJay Gigolos, Vol. 6 and Futurism) though it is a great song with a Cramps motorbike vibe. I would definitely go with Down In Motion by Fat Truckers, it's got this amazing sea shanty vocal and is yet another reason why they are one of my favorite bands this year. Word is there album is coming soon, but certainly not soon enough!

White Trash give us two songs, including I Don't Love You and Parasite. I Don't Love You is my favorite song on this compilation, with lyrics like "I don't love you for yourself, I love you for your money" sung in that cold fem electro style which makes my pants wet and an electro cowbell through distortion. Parasite is ok, but doesn't make me as excited for more by White Trash.

The two I Monster tracks add the most variety to the proceedings. Electricalove reminds me of FC Kahuna in their mellow moments and is really fine with it's dreamy female vocals (slightly tweaked). Kneel Before The Gods Of Rock'n'Roll is an amazing funked up piece of electro with it's synths imitating guitars and vice versa.

Stazi's two tracks, How Sleazy Do You Want It? and The Drifter are fine but I'm not sure how well they will last over time. Daggers' Across the Disco is a great Miss Kittin impersonation, and will make anyone feel dirty whose hitting the dancefloors. Prinz Bambi do those a favor that missed Alan Vega's primo slice of electro mania called Saturn Strip (from 1983) by doing a great cover of Goodbye Darling. Adding a soulful electro vocal rather than Vega's usual chant is a nice touch and updates the song well.

Dog Ruff's Jon E Storm combines a Le Tigre vocal style with a bassline very much like Fat Truckers' Anorexic Robot. It's definitely got a great clipping rhythm and punky fem vocals. Hiem's Chelsea sounds like an electro version of Arab Strap and I'm sure will be a lot of people's favorite track with its Trainspotting vibe (and profanity).

I'm really hoping that Northern Electronic is just a tip of this northern iceberg. It's a really fine compilation that needs to be in your cd collection.

other related reviews in the gullbuy: