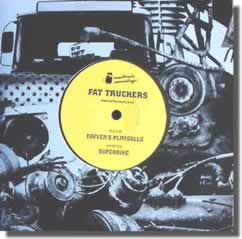 Fat Truckers are a band from Sheffield who play the type of music I'd like to see in a club. Their sound is a very live sound - something like Add N To X mixed with the Cramps.

They are much more rock than the highly evolved technology dependent electroclash style artists. 'Superbike' is all rock drum beat, fuzzy synth, and shuddering vocal. Last time I heard a song of that title was 'War of the Superbikes' by Tesco Vee after the Meatmen broke up in the 80's. This song is just as good.

'Favver's Plimsolls' is an instrumental that piledrives with all the force of a punk rock song.

Fat Truckers have released precious little so far. They are on both Sonic Mook compilations, as well as City Rocker's 'Futurism.'

This 7inch is their only release outside of the impossible to find 'Teenage Daughter'/'Multiplex' single on Cercle Records. Cercle Records is a label started by Steven Claydon of Add N To X. The 3 singles I know about on Cercle are pure killer - Fat Truckers, National Bandit, and I Monster. There may be more releases, but Cercle has small runs and spotty distribution.

Fat Truckers have a new 12inch single called Anorexic Robot coming out soon, with a remix by I Monster on the flip side. It will also be on Roadtrain Recordings - the label they run themselves.

Singles like 'Superbike' are needed now. I hope Fat Truckers do not polish up too much. Right now they are the Buff Medways of synthcore.