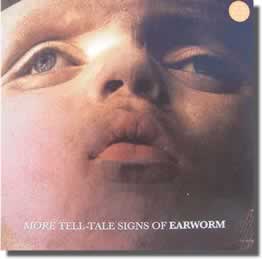 This is the second full compilation of bands with releases on the Earworm label, based in Manchester, UK.

The unifying instrument is the guitar here, more than any other, its sound is in the front of all these tracks. If you are interested in minimal, effect-laden guitar sounds-this is the compilation for you. 20 tracks in the course of two disc -- instrumentals and rockin' spacy pop abound.

On to the First Disc:
It starts out with the heavy nearly scathing instrumental 'Scene 30' from Echoboy and then winds its way through a number of breezy summery tracks.
Songs by Left Hand, The Apples In Stereo, The Minders, Ma Cherie For Painting, and the Green Pajamas provide just the right amount of blissful country pop-songs that would fit well alongside the best from the Beachwood Sparks or anything off Siesta Records.
Old personal favorites are here too: Gnac, with the cinematic instrumental 'The Moustache', and The Screen Prints with the stand-out Brian Wilson-esque 'Her Name I Don't Remember'.
Love Machine has very minimal guitar and light female vocals.
The last track from Lenola sounds like Sixties pop with strong electronic flourishes.

Disc Two:
Again, the opener 'The Motorway Journey of Hope' from Epic 45 is a pulsating instrumental that almost reminds me of something by Fridge.
The Cul de Sac instrumental is like a country tune with harsh bursts of noise towards the end of the track.
From here the journey begins through some lo-fi pop tunes from The Gerbils, Southhall Riot and ending with Force.
The rest of the disc is full of instrumental tracks starting with Kimonophonic. This is one I'm sure you're acquainted with as the 7inch was purchased for the station upon its release-it's a brief absorbing electro piece that should fit nicely into any set.
The Slowes provide the listener with a slow keyboard and drum machine work that sounds like part of a soundtrack to a low budget sci-fi tv serial.
Portal's 'Hydro-Electric' version II reminds me of something similar to anything by Roy Montgomery or Dissolve-its an echoey guitar-based tune.
Following suit, Opia turn out a droning guitar and flute cut. To end with, 'Fire Inside' by Sunray has repetitive vocals that sound really derivative of anything by Spacemen 3.

The bulk of this compilation originated as 7inch for the label, although there are a few exclusive tracks as well.