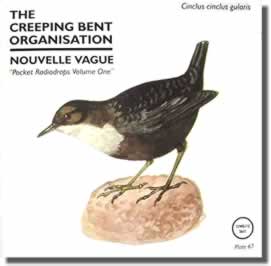 Nouvelle Vague is an interesting sampler from Creeping Bent of their roster. It's a label with a variety of sounds. This is the first of their releases I've heard, but I am familiar with some of the bands. The nice thing about a compilation from a vaguely familiar label is there's always a good chance you'll come across bands you don't know who turn out to be a pleasant surprise. The Creeping Bent site has good bio info on all of the artists, some of whom are from the early days of punk.

Track 1 'Johnny Bristol Flu' from CC Sager has Gareth Sager, of Pop Group. I like the lazy feel and the shuffling percussion. It's a wistful song with funny lyrics about getting over someone 'they named a disease after you, after all you put me through..' The vocals are charming in a barely in tune way.

Track 2, '22 Blue' by Nectarine No 9 is the first new gem for me here. It's bare bones strummed guitar, tambourine and (I think) a lone floor tom. The imagery is desolate, but beautiful 'Fast asleep in Christmas paper lying in the park..counting up to 10 again hanging out to dry..' and the vocals are earnest. This track is too short (only 2 minutes)! I can't wait to hear more from them.

Bill Wells and ex Belle and Sebastian cellist Isobel Campbell collaborated on a release of lesser known Billie Holiday songs and 'Please don't do it in here' is track 3. I like Isobel's singing with B & S and Gentle Waves, but not with this material. Billie had a haunting, fragile voice you'll never forget. Isobel's half whispered style works well in her other outings because it draws you in, but not here.

Secret Goldfish is one of the silliest band names I've heard, but their track (4), an Edwyn Collins (ex Orange Juice) song 'Ain't that always the way' will make you forget that. It's another minimalist number, with acoustic guitar, nice girl/guy harmonies and keyboards. I like how they deliver standard Edwyn lines, 'If you choose to wear your heart on your sleeve, well let me tell you now there'll be no reprieve..' This is another new gem for me and this song is the right length, just under 3 minutes. I'll be glad to hear more of their stuff too.

Mr. Suicide, Alan Vega and former Altered Image bloke Stephen Lironi collaborate for Creeping Bent as Alan Vega and RCTJ for track 5, a timely number called 'America' with some colorful commentary from Vega over Lironi's collage. I've never been much of a Suicide fan (I preferred the tribute), but I like Vega's musings and some of the (what sounds like) telly samples.

Track 6, 'Mongoose Sanitizer' (bis remix) was good for my insomnia. Its synths and programmed drums, looped around someone repeating Sanitizer. It had nothing there to draw me in.

Scientific Support Department is an electronic dub collective led by Docherty. I like this track. It has a staticky backdrop, a memorable string loop and trebly programmed drums.

Translement 'Marlyborne Rusk' has crackly synth drums, a cheap sounding synths and poorly recorded (deliberately?) vocals that start out slow. It speeds up at the end with a loop of someone saying 'cut' I think. It seems like amateur bedroom electro pop.

Track 9 features Monica Queen, who sang on Belle and Sebastian's 'Lazy Line Painter Jane.' It sounds like she's trying to sing like a cross between a torch singer and Ronnie Spector and that's fine when she's on key, which sadly isn't often enough. I always appreciate quirky singers. The best ones know their vocal limitations and know better than to venture outside of them

Ex Subway Sect frontman Vic Godard has a slightly dirty sounding number here on track 10 'Nothing is Easy.' I'm not a Subway Sect fan and this track doesn't make me want to give them another spin, 'you've got to accept that if you want to get chicks you've got to do something sleazy.. but don't get upset you've got to keep it in check because nothing is easy..' Isn't he too old for this?

The Leopards are ex members of Paul Quinn and The Independent Group. They have collaborated with label mate Vic Godard and have also teamed up with ex Orange Juice member James Kirk. This track (11) rocks the most here. It has snotty vocals and it's fast like a Big Black song.

Tog are the quietest of the lot and they close out this compilation with a brief, pleasing instrumental 'The Resevoir.' with accoustic guitar and keyboards drifting in and out and sleighbells at the end.

Creeping Bent has a strong roster and a diverse sound. They seem to be succeeding at something that's not easy, releasing music that pleases all kinds of ears. Fave tracks 1, 2, 4, 5, 7, 12.