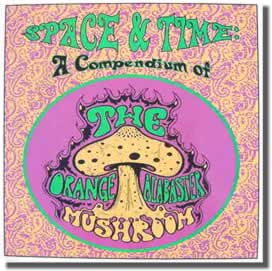 The Orange Alabaster Mushroom is the project of Greg Wilson. Based out of Ottawa, Wilson has, over the past 11 years, been sporadically recording his songs with his friends, and this release compiles most of them.

Side A of 'Space & Time' covers years 91-92, and the flip covers 98-99. Apparently between 92 and 98 Wilson did no recording under the OAM name, and what's interesting is that the record's two sides don't sound very different at all.

The band's sound, as you may have guessed from the name of cover art, is a brand of lofi psychedelic pop, full of jangly guitars, fuzzed-out basslines, and tons of organ. While it could seem easy to brand the OAM as Earworm's version of an Elephant 6 band, they should not be written off as such. Wilson's songs do not fall into the 'lower than lofi,' ultra-twee trappings of much under the E6 name. Instead, Wilson's hooks and melodies are strong, the production is very appealing throughout, and the majority of the songs are grounded firmly in the 60s garage rock sound. You will find none of the insubstantial sound 'experiments' that have made many E6 records so tedious.

Highlights from the 91-92 period are 'Your Face is in My Mind,' the band's first single, and 'Tree Pie,' a song first heard on the 'Tell Tale Signs of Earworm vol.1' compilation and probably the most rockin' tune on the 'Compendium'. My favorites from the 98-99 side are 'Ethel Tripped a Mean Gloss,' the longish title track, and 'The Slug,' the A side from the OAM's only other Earworm release.

While a few songs suffer from weak lyrics or distasteful instrumentation (i.e. the kazoo solo in 'Sunny Days'), most of the 'Compendium' will please fans of the genre. An extra incentive to pick up this record is the announced door-shutting of Earworm Records (earwormrecords.com) after 6 years...sob