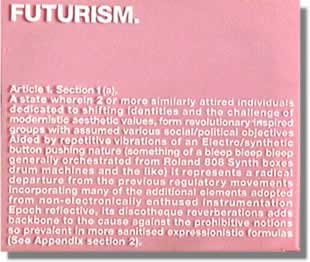 At any other radio station, the twenty-five tracks compiled on City Rocker's Futurism. comp, comprising the standards that have come to define the generically-labeled'electro' movement, would be radically fresh, a glance into a new and exciting dimension of music.

We at 'ZBC have been spoiled though, and instead Futurism. feels like a relevant chronicle of electro's first wave. Futurism. spans two CD's, with the tracks mixed together, capturing both electro's great debt to the dancefloor, and moreso, the undeniable likeness all of these artists share. Futurism. is a lazy person's dance party, as seamless progression from Ellen Allien's'Stadkind' into Golden Boy's'Rippin' Kitten', from FC Kahuna's'Glitterball' into Adult's'Hand to Phone' keep the room bumpin'.

The majority of the tracks are remixes, but after hearing most of the originals, the new mixes are generally subtle, or sometimes strangely slowed down. A contemporary electro comp is generally hard to critique, with the song formula, hard synths, beats, and vocal samples, being the same. While one wonders how long the sound can remain fresh, the Futurism. tracks, even as a continual mix, are remarkably alive: punchy and funky, detached and in some cases, playfully morbid.

Futurism's arrival at 'ZBC coincides neatly with the New York Times article linking 80's culture with the music of today. Clearly, the sound and aesthetic of electro is rising out of its relegation to dark dancefloors and the chatter of Williamsburg dilettantes. With Chicks on Speed's'Eurotrash Girl,' Peaches''Lovertits,' Adult, and Fisherspooner's'Emerge,' you can chart the electro's meteoric rise.

The tracks on Futurism. represent the sound of electro before the world smashed upon the door to the dance party. Risen out of its jaded obscurity, it's hard to imagine the new directions of electro getting any fresher than here.