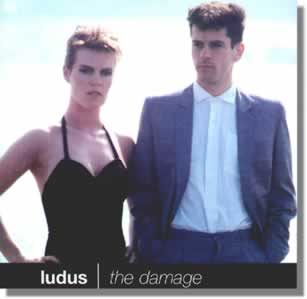 This is the definitive collection of the band LUDUS. Nearly condemned to obscurity via releases on small European indie labels in the late-'70s/early-'80s, almost all of their songs have finally been brought together on CD.

This band was essentially Linder Sterling and Ian Devine. Linder, although originally from Liverpool, was a fixture in the Manchester, UK art punk scene. Her personality and unique view of the world along with Ian Devine's music created LUDUS.

I cannot do enough justice to this band in the scope of this review, so I strongly urge you to read their biography [read biography]. It is also the webversion of the CD's liner notes. Musically, the band has very upbeat pop songs that sound like manic deconstructed jazz. However, a lounge act this is not, Linder's post-feminist lyrics clearly place this band in the forefront of cultural movements at the time.

Songs like the cracking LITTLE GIRLS, with bouncy drums and jangly guitar, encouraging you to 'wake her, shake her, take her maker', is just priceless. Oh, there are soooo many good songs on this disc its very hard to choose a few---their quality is extremely high, its like shooting fish in a barrel! I CAN'T SWIM I HAVE NIGHTMARES starts out like a pop song and then half-way through Linder dispenses with lyrics altogether and starts wailing during the break down almost like a British version of YOKO ONO! This is also apparent on a few other songs like TOO HOT TO HANDLE. There is a strangely straight forward almost tongue-in-cheek version NUE AU SOLEIL, a song once made popular by Brigitte Bardot.

This collection should make a welcome addition to anyone who has an affinity for true post-punk.