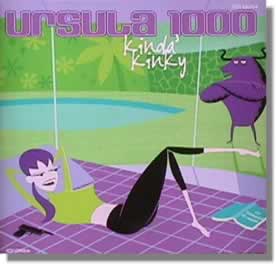 Now THAT'S kinky... says the girl in the title track of the third CD by NYC based artist Alex Gimera (Ursula 1000). Rebecca Madder is the girl and Brother Cleve (ex-Combustible Edison) plays organ in this jump out of your seat track.

The first time I listened to the full CD I was disappointed that none of the remaining tracks were as immediate as that killer opening cut. The second time I listened, both 'Tigerbeat' and 'Riviera Rendezvous' caught my ear. Now, after numerous listenings, I enjoy the CD all the way through.

'Kinda Kinky' is a return to the sound of the debut disc 'The Now Sound of Ursula 1000.' Ursula 1000's second disc 'All Systems Are Go-Go' was a mix disc that reminded me of a poor imitation of the two 'Spinout' CDs (mixed by Mansfield) which came out in Japan.

'Kinda Kinky' does have a J-pop feel like Mansfield, Miniflex or Losfeld, but with a NY sensibility that uses less elements than the everything-but-the-kitchen-sink J-pop artists. The result is cut and paste pieces of marching brass bands, language instruction tapes, Bollywood and easy tracks laid under beats and slick collage assemblages. It is put together with art and vision, and is quite easy to enjoy.

Ursula 1000 is my favorite artist on Thievery Corporation's Eighteenth Street Lounge Music, and I recommend this CD to you.