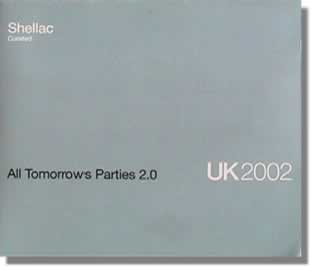 Released a year ago, ATP 1 was a rather promising display of the diversity and edge of American artists. While UK acts like Autechre and Broadcast gave the comp necessary depth, ATP 1 was balanced by fresh-sounding tracks from Prefuse 73 and Cannibal Ox and explorative remixes from generally predictable bands like the Sea and Cake and Tortoise.

You listen to ATP 2 and wonder if the last five years of music happened. Which is not to discredit the musical ability of any of these artists, but as a whole, the comp feels out of place in today's beat heavy musical context. Curator's Shellac offer an exquisitely Shellac-esque song, with pounding rhythms and amazingly tight playing. But other than a drum flourish to close out the track, the song never strays from that expected formula.

Will Oldham's cover of deceased folk singer Kate Wolf's 'Early Morning Melody' never gets off the ground in its three minutes, and the classical chamber sounds of Threnody Ensemble and the Rachel's tease, but never explode. The comp's best tracks come from band's twenty years past their prime.

Though it's pleasing to hear Mark E. Smith and especially Mission of Burma's rousing 'Trem Two,' one wishes Shellac leaned towards current bands at least dialoguing with the 80's instead of floundering in the remains of what has proceeds post-post-rock. Maybe in ten years when the 90's become chic, people will look back enviously at these artists. Until then.