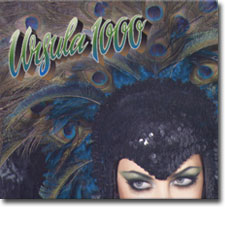 Ursula 1000's (Alex Gimeno) latest album, Here Comes Tomorrow is a variety filled, so-so album that sounds like it could have been recorded 6 years ago. Not much has changed in the Ursula 1000 sound besides a few added genres of music that are tackled here. It's a fun sounding album, but doesn't sound wholly inspired.

While these collaborations often have elements like great horn solos or lead vocals, and they are certainly better than the filler songs like Mirkin The Mystik, the album doesn't hold together as a whole.