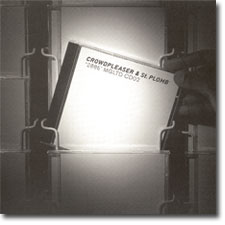 2006 is the first full length cd from Crowdpleaser (aka Gregor Schönborn) & St. Plomb (aka Vincent Kolb) after a series of 12" releases on Mental Groove Records and compilation appearances together. The highlight of these releases was Rather Be (featuring Selfish In Bed, aka Melissa Zemmat) on a Mental Groove 12", which was later featured on the Mental Groove Where Is Here collection from 2002, Tiga's DJ Kicks from 2002, and Ivan Smagghe's (aka Black Strobe) How To Kill The DJ [Part One] on Tigersushi from 2003.

It's a shame Rather Be wasn't included on this disc since it had a sensual tension with its unique and tense snare hits and sensual buildup. Crowdpleaser & St. Plomb's collaborations on 2006 aren't nearly as sensual here, working with Kate Wax, Paris The Black Fu, Stéphane Perrinjaquet and Kalabrese.

Kate Wax is a Mental Groove artist, who we first heard singing her electronic blues on the Mental Groove compilation Hosomaki: Mix 2, that has been heavily touted since her Reflections Of The Dark Heat cd release in 2005.

The collaboration on Crash on Time with Kate Wax continues to mine that electronic blues sound. Kate Wax breaks into a falsetto while rhythms that sound like tincans being kicked vibrate behind her, and pulsing bass synths beat a rhythm out in your skull. This song sticks out here as the most unique song on the album, which is a good thing, adding that balance that good collaborations add.

The other collaborations aren't bad but are less noticeable - including added keyboards by Stéphane Perrinjaquet on the prog synth intro track Early and the propulsive Today. Perrinjaquet's keyboards add a nice analog squelch to the rhythmic workout of Today, which jets its way deeper and darker with each added rhythm track.

Paris The Black Fu's (aka Mack Goudy Jr. from the Detroit Grand Pubahs ) adds his voice to the 2 minute long filler-like Shift which seems like it could've been worked on a bit more to feel complete.

The claps added by Kalabrese (aka Sascha Winkler) to the beat heavy 1, 2, 3 are hardly noticeable, but that doesn't stop this track from being one of the best here. You might say to yourself, there are indeed handclaps on this track, which do add a living presence, but its the addicting pounce of the bass and the echoed synth lines which really give this song its character.

2006 can stand on its own though without the need for much collaboration. The second track New Times Roman mixes with the prog-like synth intro of Early with a pulsing synth accenting its thick bassy rhythm and the hissing percussive sounds building subtly behind it as the rat-a-tat snare finds its footing. And we end near where we began with the synth only ending track of Last which has peels of distorted keyboards that would not be out of place on a Tangerine Dream members' solo album.

Crowdpleaser & St. Plomb in the gullbuy: