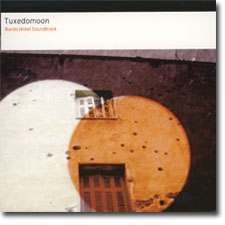 In May of 2004 Tuxedomoon released Cabin in the Sky. The album was their first  in six years and anticipated by dedicated fans of Tuxedomoon and old time experimental/avant garde aficionados. Bardo Hotel is the newest release that solidifies the band as a leader in the ranks of art and music experimenters.

Long lauded as experimental virtuoso's since 1980 the Bardo Hotel soundtrack will  certainly appease the fans of Tuxedomoon's less linear experimentations. Cabin in the Sky had many collaborations and the sounds were approachable with a smooth and relaxed feel to the music. The band's trademark is  commandeering sounds from a divergent goodie bag of influences. They have constantly reinvented themselves. On one album you can expect to hear smooth dulcet sounds that clash with brash bursts of harsher runes.

Bardo Hotel is derived from the french no-name hotel where Beat writers and artists squatted while creating in the 1950's. It was at this sqaut hotel that William Burroughs worked on his cut-up/fold-in technique utilized in the novel, Naked Lunch, and by Brion Gysin, the poet, author and artist who's novel title is co-opted for the film created by Greek film maker George Kakanakis and Tuxedomoon.

The band members went back to San Francisco to create this work which is essentially a live performance  spontaneously conceived between 2005-6. Bardo Hotel is the bands first work stemming from their S.F. origins in close to three decades. The players are regulars;  Blaine L. Reininger, Steven Brown, Luc Van Lieshout and Peter Principle. Winston Tong does not appear.

The CD is a two fold cardboard digipack  case with graphics that are scene extracts from the Bardo Hotel film. The design is slick, smart and simple. The liner notes also utilizes pulls from the film with text overlayed. The words begin as an introduction and then are poetic verbal descriptions of the concept that floated in the imagination of the players. The liner notes are hard to locate at first glance in the center folio.

The Bardo Hotel is rooms. Small and large rooms. There is travel to get to the Hotel. You pass through different cultures as you get to your destination. Some rooms you stay in for a brief time. Some rooms you stay longer and linger. Some rooms are comfy and cozy while others are hard to settle into. Some have noisy neighbors that love to dance and party into the night. Each room has a story.

You travel on this CD. You travel through cultures and influences, paces and beats, styles and technologies. You are in airports, automobiles, walking on the streets passing street musicians, hearing announcements and conversations as you meander through havens.

Overall the sound is classic Tuxedomoon clarinet and trumpet with ambient, classical tones circling with samples and keyboards. There are no true drums or beats. The artists are painting impressions with sound. It is hauntingly beautiful when at its best. At its worst the sound is just  rough pavement as you step to a more interesting and pleasing stopping place.

The sound is very meditative. It is not new age. It is avant garde masters having on a free associative jamming journey. The players have a map of the past to guide them into this mindscape so  it won't be too far afield from Tuxedomoon's origins. It is actually a trip back and then into the future. Cabin in the Sky, which was much different than early work with collaborations by newer artists and producers. This is all Tuxedomoon's palette.

There are brief reprises of old Tuxedomoon songs in the middle of the Bardo Hotel soundtrack. Appearing are disjointed and sparse remixes of  Cabin in the Sky's Baron Brown, Half Mute's Loneliness and Desire's Jinx. These are not the shining moments of the CD but are very interesting experiments that contrast the lush beauty of the multitude of tracks that serve better as long, interwoven interludes than single tracks.

I have yet to find any information about other than the original performances and viewings of the Bardo Hotel film work with the musical accompaniment. The music  stands well  apart from the visuals. Since the score was created with the visuals it would be nice to see how they work together. Perhaps with moderate sales and interest a DVD will come out or a tour of the material based on life on the road. For now, relax and take a lush and supple mind trip with Tuxedomoon to their version of The Bardo Hotel.