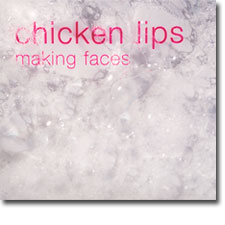 Making Faces is the first Chicken Lips record to have vocals. The duo have moved from no vocals at all (occasional distant vocal samples have always been there though) to an album with every song having a full vocal treatment. Does it work? No.

Johnny Spencer is the new member of the band who sings. He is from Spain, and I'll bet he lives in Ibiza, based on listening to his lyrics. His voice is closest to the vocalist for Who Made Who. Dean Meredith and Andy Meecham are the original core of Chicken Lips.

The lyrics of the song (a lyric sheet is enclosed in the disc) shows most of the songs to be about warm weather places, club life, sex and partying (Ibiza, maybe?)

Sweetcow starts off the CD. The music is great. The vocals sound a bit like The Associates, then there is a women talking/rapping (like Blondie in Rapture) with an accent. As the song kicks in, Johnny Spencer sounds like Sting.

Hot Love is an ode to gay sex, sung in a falsetto like Jake Shears of Scissor Sisters, or tthe BeeGees.

The verses of Aim Fire (XDC) have vocals that sound like Phil Collins. Twiggy sounds like Robert Palmer.

The album proper closes with Motion Sickness, which sounds a bit like Soulwax on the verses and Kelly Polar during the chorus. The lyrics sound like the chronicle of someone living in Ibiza and clubbing every night.

To describe what this record sounds like in broad strokes, I would say 80s hair metal AOR, when bands like Bad English started songing on the scene with power ballads. I also would say it sounds like Peter Gabriel, Phil Collins, and Soulwax in their studio albums as a band.

The paragraph above paints a grim picture. At this point in time I can never picture myself listening to any of those artists, so there is really nothing great I can say about this record either. The music is good, but it is buried under vocals that ruin it (for me) on every song.

The CDs saving grace is achieved exclusively on the Japanese version (in the UK, the record came out on Adrift Records). The Japanese version has 4 bonus tracks; dub and remix versions of tracks that reduce the harm the vocals have done to this disc.

Chicken Lips in the gullbuy: