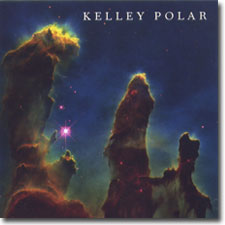 Kelly Polar is quite a guy: he led the Kelly Polar Quartet through a handful of excellent 12inch single's on Morgan Geist's Environ Records, and he provided the classic disco styled strings on Metro Area and Morgan Geist solo releases.

Love Songs of the Hanging Gardens is not a full length continuation of what he has done so well already, or a gathering place for all the releases he has put out so far. It is a crafted collection of vocal pop with a sound not far removed from the 80s English band China Crisis.

My Beauty In The Moon has female vocals harmonizing in a way that will lead anyone familar with PreFab Sprout to feel nostalgic.

The record sleeve makes the disc look like a prog rock record, and to tell the truth, that comparison is not entirely off-base. If you have ever listened to the German band Nektar, you will find a lot to like in songs like Ashamed of Myself. The Morgan Geist / Kelly Polar production is first rate, and intricate layers of sound reveal themselves at every corner.

Kelly Polar's strings make their strongest appearance on The Rooms in my House Have Many Parties and In Time. Otherwise they are background components in electronic pop tracks, all of which feature Kelly's vocals as main ingredient.

In Time has a spoken part and overall feel that reminded me of the B-side of the amazing 10inch Straight Lines b-w On Islands, recorded by the forgotten 80s band New Musik.

Is this album worth buying? I would not say so. After repeated listenings there were only three songs that caught me and remained in my head. The record is very low-key, and not at all like the disco masterpeices Kelly Polar Quartet have been turning out for several years.