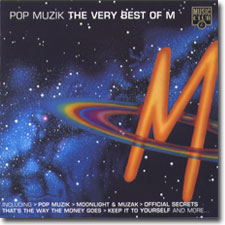 In 1979 Robin Scott dropped a 12inch single on the world that instantly brought him fame and noteriety. Pop Muzik was a perfect slice of New Wave, comparable to Buggles' Video Killed the Radio Star or Thomas Dolby's She Blinded Me With Science.

Pop Music - The Very Best of M is the most complete M compilation I have seen. It is we sequenced and very thorough, even including 4 tracks from Jive Shikisha, the would-have-been fourth M record in 1984. Jive Shikisha was recoded in Kenya and used a modern African sound, and was just too much for an already exasperated record company to take.

There are many worthy tracks on this CD. Moonlight & Muzak was the follow-up single to Pop Muzik, and the first time Robin Scott indicated that he was not going to rewrite Pop Muzik for the rest of his career (though there are a few Pop Muzik sounding tracks, such as the title track to the second record, Official Secrets.

Robin Scott had a lot of sounds to offer. Satisfy Your Lust is not far away from John Foxx era Ultravox. Transmission is an instrumental with samples of dialog. Later he used this tact again on the track Dance On The Ruins.

The African tinged tracks are pretty interesting, though Robin's distinctive voice brings them far from the world music ghettos artists like Paul Simon travelled to in their careers. Africa Matanga is my favorite of the four Jive Shikisha tracks. It uses native female and male vocals, and he does not sing on the track, so it has some authenticity to it.

There are many M compilations. This one is out of print and expensive to buy used, but it is the best one to work toward finding if you want to learn about M. In a few weeks the gullbuy will be reviewing Robin Scott's 1969 debut record Woman From The Warm Grass.