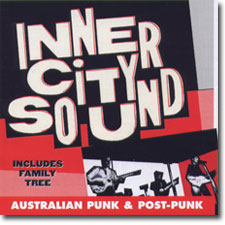 Inner City Sound was a book which told the story of Australia's punk / post-punk music underground of the late 70s / early 80s, which paved the way world-wide for indie / alternative rock to follow.

Clinton Walker wrote the book Inner City Sound in 1982. It has been out of print for years, but was recently granted a new edition through Verse Chorus Press.

This 2 CD compilation was produced by Clinton Walker as a companion to the book. It includes a fold-out poster with a complex hand-drawn family tree showing the lineage and inter connectivity between the many bands which populated Australia's punk and post-punk years.

An example of the diversity on this set:

The set is so well thought out and put together that every tracks fits exactly where it is located in the set. Each disc starts off with an instrumental that eases you in to the long ride ahead.

Some classic tracks are here. Wild About You, (the b-side of Saints' first single I'm Stranded) is here, Gobetweens' incredible and epic Darlinghurst Nights is here. Australia's X is here with TV Glue. Early Nick Cave is here with Boys Next Door Sex Crimes and Birthday Party Release the Bats.

It is almost impossible to imagine someone being disappointed with this compilation. If you buy this CD you are obviously interested in the history of Australian underground music, and there are so many different sounds represented here that no matter what you are looking for, it is probably here.

Australian music compilations in the gullbuy: