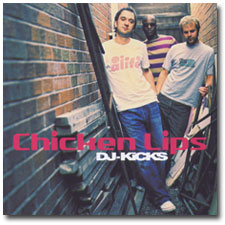 Chicken Lips are Andy Meecham (drums), Dean Meredith (bass) and Steve Kotey (dj/engineer), who was recently added to the lineup so they could do live shows. They are from Stoke-on-Trent in the English midlands.

They are not a new band - in the early 1990s they recorded together as Bizarre Inc. - but they are getting a lot of attention today as the idea of disco dub gets more popular. Andy and Dean also record together as Big Two Hundred and ZeeFunkg. Andy records as Sir Drew and Emperor Machine.

This is the 20th DJ Kicks record. The series started in 1995 "to supply mixes designed for home stereo use as well as for the dancefloor." This is Chicken Lips second mix album within a year, following'Body Music,' which they put together for the Nite Life label.

I remember listening to (and liking) the Carl Craig 12inch remix of the Congo's Congo Man on Honest Jon's Records, though I never bought it. Here it is on this disc. On the other hand, everyone has a copy of Nina Hagen's African Reggae in their collection somewhere, and here THAT is on the disc as well.

Stuff I had never heard that I like on this include the Larry Levan remix of Gwen Guthrie's Sly & Robbie -produced disco track Seventh Heaven. Larry Levan is god-like for fans of first wave disco (like me). Also, there's a Matthew Herbert remix of Norwegian vocalist Karin Krog's Meaning of Love, and three Chicken Lips originals, including the first ever Chicken Lips track with vocals.

There is the funk with Jellybean's The Bubble Bunch (written by Jimmy Spicer), Hi-NRG with Sharon Redd's Beat The Street, and Paul Simpson Connection's experimental house track Treat Me.

The record highlights music that inspired Chicken Lips, making it a difficult listen for many people, as Chicken Lips were inspired by various flavors of disco that might be unbearable to you. For me, the disc is a joy. Even the Nina Hagen track was well chosen, though I usually do skip past it.

Chicken Lips in the gullbuy: