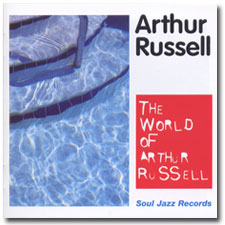 Arthur Russell is getting a lot of attention right now. There is this CD plus the recently released 'Calling Out of Context' on Audika. And there is the promise of many more Arthur Russell records, as hundreds of hours of unreleased tapes have been uncovered.

Arthur would have been a household name by now if he had joined Talking Heads as was originally planned. In fact, he plays on their 1988 LP 'Naked.'

It took me many listening's to see the big picture regarding Arthur. I didn't like the songs he sung on, particularly Keeping Up and A Little Lost (though I came to like them later) . His voice is plain - not particularly good and not particularly bad. It reminds me of when Burt Bacharach sings. Burt writes genius songs, but his songs shine brightest when sung by others. The recordings with Burt singing sound like they were made as demos to guide the people who eventually sing the final versions.

Keeping Up and A Little Lost are also the least disco sounding tracks on the disc. I had been waiting months for the release of this comp to hear the underground disco tracks Arthur made, and was surprised to hear these two tracks that sounded more Paul Simon than Paradise Garage. If fact, several of the other songs have a touch of the Graceland syndrome about them. The CD bonus track Indian Ocean Schoolbell/Treehouse in particular, though to be fair the track progresses into rhythms that are more Afrobeat than Graceland.

With time I came to realize that a better comparison (and one I can live with better!) is Arto Lindsay. Arthur Russell's non disco songs have a Brazilian feel about them, and might have been a blueprint for the sound Arto Lindsay has been writing in during the last decade.

The liner notes are written through the personal perspective of Chris Menist, and they communicate the fact that Arthur was a perfectionist that released so little because he was always making new versions of tracks instead of pushing finished tracks to get released. He frustrated people who wanted to release his records by creating tracks that confounded expectations, then constantly refining the track till the people releasing them felt that anything they released would be eclipsed by something he was working on for next month.

Arthur Russell in the gullbuy: