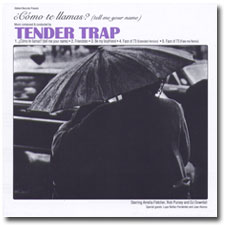 Tender Trap, the fourth project from Amelia Fletcher and company are back with a new ep ¿Como te llamas? on Elefant that has three new songs and two versions (plus a video) of Face of 73 from 'Film Molecules'. Amelia Fletcher, a favorite veteran indie grrl has a voice that can deliver the nicest and cruelest things in one of the sweetest and most distinctive voices ever that works with any sound her long time band come up with.

¿Como te llamas?, in English and Spanish with Lupe from Pipas could be a personal ad in the New Music Express set to an electro pop beat with some organic touches and the right dose of indie pop culture film and music references (Smiths, Godard’s Breathless). The story about big city loneliness and the possibility of serendipitously meeting someone continues with the pining indie girl’s cool outfit and has an ending that you can only guess at, but hope will turn out happy.

Friendster continues this theme, but this time it’s in cyberspace, the loneliest place of all. The references have similar decade disparities (Mister Lady, J. D. Salinger’s Catcher in the Rye). This time, they go for a countrified sound, with slightly twangy guitar and some brush drumming. Her commentary on this popular site is on the mark about how an online community can be just as alienating as real life.

Be my Boyfriend has a 60s go go guitar sound and beat with unusual ooh oohs and harmonies. Amelia’s singing is sultry, deep and strong in this yarn of someone teetering between thriving on a conflict riddled relationship or going for a smoother one, questioning both options the whole time.

The remix of Face of 73 by Juan Alonso from La Monja Enana is more interesting than the extended version, which merely adds a little more length to a song that was fine as is. He mixes acoustic Spanish guitar with vintage synthesizers. The organic and electronic blend together naturally.

Even though the new songs were recorded in different places, Tender Trap blend very different sounds on a short release and it all fits.