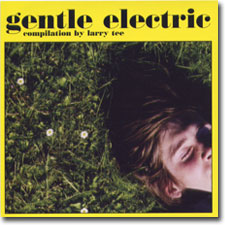 Gentle Electric finds the person who created Electroclash sporting a new sound in a post-electroclash world.

Larry Tee has a long history in the world of music, with connections to a long-ago and far gone world where Divine was an hi-NRG artist and Bobby Orlando shepherded a dozen excellent bands on his own O Records.

Larry Tee grew up in Atlanta and moved to NYC in 1989 with RuPaul. Larry wrote RuPaul's hit Super Model (which he later resurrected on his 2002 Badd Inc. record). He created the Love Machine Disco 2000 parties with clubkid Michael Alig (subject of the film Party Monster). But ultimately he became entrapped in a battle with hard drugs that he (that anyone!) was bound to lose.

In 2001 a cleaned up and connected Larry Tee recognized the emerging sound which combined electro, hi-NRG, italo, and 80s synthpop, and coined the term 'electroclash,' which he even registered as a domain name. The sound became huge in 2002, but by 2003 it became a bit of a curse word. Today, all the major artists of the scene have redefined themselves, leaving great distance from their former electroclash identities.

With cover photography by Rolling Stone/Spin photographer Conrad Ventur, Gentle Electric is a well done package showcasing a new crop of unknown bands gathered by Larry Tee. The sound is indie-pop - the kind of electronic indie-pop which has been kicking around for a decade. But that is not to say that anything is wrong here. The bands on Gentle Electric have turned in some nice tracks that are only available on this compilation.