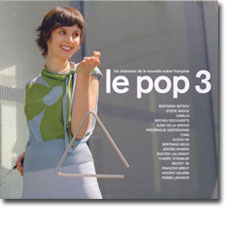 Oddly enough, the numbering of the Le Pop compilations has gone out of sync after Groove Attack released Le Pop 2 and then Le Pop En Duo as their third compilation. But I guess that doesn't stop Le Pop 3: Les Chansons de La Nouvelle Scéne Française from being third in the Le Pop series, especially since the first Le Pop is impossible to find.

Le Pop 3 mines a similar territory to the previous Le Pop and Le Pop En Duo compilations, bringing back some names from those earlier compilations and adding some new names along the way. All the while, Le Pop series has remained a consistently excellent way to delve into the new French pop of today without dishing out for a slew of French imports. Le Pop 3 includes slices of indie pop, reggae pop, dream pop, electronic pop, orchestral pop, and some off kilter pop - all done French style.

Bertrand Betsch and Stefie Shock start the compilation out on strong footing, with Bertrand Betsch's Pas De Bras, Pas De Chocolate, an indie pop tune in honor of chocolate with a Pixies type of sound, and Stefie Shock offering up yet another strong track called Un Homme A La Mer. The Stefie Shock track is from his Le Décor album which was originally released in Canada in 2003 and re-released in France in 2005. It took years for this French Canadian singer to get noticed, but he finally was noticed in a big way.

There a couple of reggae inflected tracks back to back in Keyornew by Mathieu and J'Ai Change by Albin De La Simone. What makes the Mathieu track interesting his he sings in a combination of English and French, with a laidback reggae vibe for music backing and lilting style in his vocals. The Albin De La Simone track is more upbeat, almost party-ish, but still laidback in a reggae vibe, and with accented acoustic guitar strums.

Bertrand Belin's Terminus Le Treport will please the dream pop fans with its slowly strummed electric guitars, shifting electronics and cinematic feel to it. Bertrand Belin is joined by Lhasa on vocals, for some subtle double tracked vocals. It reminds me of Autour de Lucie.

Those who like the quirkier, Tom Waits type of pop would probably enjoy the toy instruments meets electronics of Toma's Tabatha.

Mickey 3D do their version of the 4-track bedroom rock on the retro-tinged Rodeo which offers a fun fresh breath of fresh air on their tango laced pop ditty.

Francoiz Breut has been a mainstay of the new French scene, offering up consistent releases as is apparent on the grungier La Boite De Nuit, which has some cool grinding guitars which are not over-used.

The compilation ends with two forays into the orchestral pop realm. Les Filles De 1973 Ont Trente Ans by Vincent Delerm was my all time favorite track here. I loved the retro 60s use of harpsichord in a Divine Comedy kind of cinematic styled pop sound. Pierre Lapointe's Debout Sur Ma Tete, on the other hand, offers the more stagey, but no less enticing Chico Buarque inspired sound, for a perfect ending to a well rounded compilation.