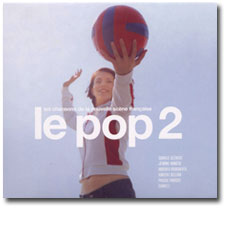 Le Pop 2 - Les Chansons de La Nouvelle Scène Française is the 2nd in a series of compilations spotlighting the French pop music scene of the past few years. It's a delightful cd designed specifically for those of us yearning for more from that wonderful scene - spotlighting many artists we may have heard of and were curious to check out along with many we've never heard before. The French scene has been developing for years from its start in the 60s and 70s by Serge Gainsbourg and Jacques Dutronc, to its continuation through the 90s by Bertrand Burgalat and Katerine (heard here in a duet with Olivier Libaux). It's a still developing scene and one worth delving further into - I definitely think Le Pop 2 will lead some of us to search out some of the spotlighted artists' albums.

I already looked further into this scene when I picked up Coralie Clement's album Salle Des Pas Perdus a few months ago - she's hard to resist if you enjoy the Brazilian influenced chanteuse vocal style of Astrud Gilberto. Both the Brazilian sound and the sweet female vocal sounds of Astrud have had a big influence in French Pop music, and Coralie Clement continues in that tradition. A song by Coralie Clement called Samba De Mon Coeur Qui Bat is indeed included on Le Pop 2, and it's one of the highlights that I kept returning to - as the weather started getting warmer, the bossa rhythms and sweet female vocal stylings of Coralie were the perfect soundtrack.

Pascal Parisot starts out the compilation firmly entrenched in the Serge Gainsbourg male/female style of vocals with a duet sung with an un-named female vocalist. The rhythm and feel is slinky and sweet and the perfect album opener.

Superflu bring us the Divine Comedy inspired Tchin Tchin, an organ drenched indie pop tune with string arrangements, strummed electric guitars and breathy female background vocals which augment the proceedings like the best of a Belle and Sebastian song.

Another song that reminds me of the Belle and Sebastian/Gentle Waves camp is Holden's Tunis, but where a of of the Gentle Waves' songs seem to hide in the waves, Holden has a whispery cathedral solem-ness to them, not unlike an indie jazz take on Claudine Longet. Holden's record label Le Village Vert is also home for Autour De Lucie.

I'm sure we all remember April March from her work with Bertrand Burgalat. To be honest I've never been a huge fan of hers, even though I do respect her work. I do love when she recreated the 60s Ye Ye sound; Le Code Rural from her 2003 album Triggers is much better than anything I remember from 1999's Chrominance Decoder. In fact it reminds me quite a bit of Saint Etienne at their 90s best.

My last favorite song is my second favorite song of the bunch - Toma's Facile. Toma mines a similar territory that the under-rated and under appreciated French Canadian Stefie Shock has been mining for a few years now. It's a retro Serge Gainsbourg style, but where the retro is firmly entrenched in a modern pop music ethos, but integrating the soulful Serge inspired vocals with samples, dub, slinky basslines, guitars and electronics.

It's too bad I'm not able to compare Le Pop 2 with Le Pop 1. But if this volume is any hint to how the first volume is, then this is a worthy series of French Pop.

French pop in the gullbuy: