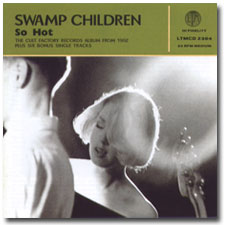 Originally released in 1982, this re-issue combines the Swamp Children’s full-length plus subsequent singles.

The immediate thing that strikes me about this band, even before listening to the music, is the name. It jars you. You are not quite sure what to expect, apart from an anticipation of something suitably primal.

All of the members of the band were between the ages of 17-19. They originated in the Manchester, UK area, hence the watermark releases on cult label Factory and Factory Benelux. The album was recorded at Revolution Studios in Manchester, home to New Order and A Certain Ratio, as well as other Factory Records artists. Michel Duval, head of Belgian label Les Disques du Crepuscule and Factory Benelux (virtually the same imprint), liked the Swamp Children’s sound so much, he funded their album SO HOT, which was only later picked up by Factory.

On listening to this album again, what becomes apparent to me is the influence of New York NO WAVE on the over all sound of the band. Prior to this album’s release the Swamp Children did contribute the track Flesh to the seminal Les Disques du Crepuscule compilation 'The Fruit of the Original Sin'.

The band is an ensemble of teens producing mood pieces influenced by Brazillian Jazz Fusion and Heavy Dancefloor funk. Comparisons to the sparse funk of ACR are apt, as they shared the same drummer (Martin Moscrop) and Swamp Children’s singer, Ann Quigley designed some of ACR’s sleeves. Ann Quigley’s vocals are similar to that of LIQUID LIQUID in the sense that they are jazz-inflected and airy.

The songs on this release tend towards the sensual and hot. Most of the tracks are built around sambas or bassy funk riffs. The vocal wisps usually don’t appear until after the first minute or so. Lyrically, the songs comprise tales of tropical romance. Their sound conjures up the aroma of the jungle and the heat of adolescence. It moves in a different direction than ACR and shouldn’t be compared to them. The Swamp Children are more atmospheric and have a latin-influenced sound. By the time you reach the end of this disc you have been taken on a journey to their world—one full of passion and sweat in the tropics.

The last five tracks are bonuses to this release and contain their early singles. Most of these tracks were produced in turn by ACR frontman Simon Topping. The last track on the CD Little Voices was co-produced by Simon Topping and Stephen Mallinder (of Cabaret Voltaire) and was recorded in the Cab’s studio; Western Works in Sheffield. With its sparse percussion and haunting vocal manipulation, it is this track that is perhaps the most experimental on this release.

After work as the Swamp Children, the band changed its name to Kalima, signifying a break from their earlier years. The Swamp Children’s sound captures the ideas and tenderness of youth perfectly. It creates a rhythm for the later hours, when your mind is working on a more sensual level. Open your ears to the world of the Swamp Children and allow yourself to be seduced.