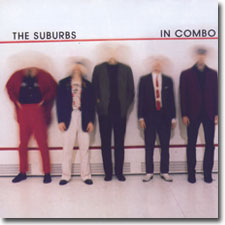 The Suburbs were a Minneapolis post-punk band that was part of the same stable as The Replacements.

In Combo is a 30 minute 13 song blast of punk attitude that came out in 1980. The songs have a deep-voiced vocalist and some angular Gang Of Four riffage.

Baby Heartbeat takes the musical feel of Cool Jerk and adds a vocal that reminds me of Peter Dayton of the classic Boston punk band La Peste, with feamle backing vocals.

The boogie lead guitar of Underwater Lovers dates the song and makes it unlistenable to me. The guitarist severely overplays, which was a fashion in late 70s rock bands.

The vocals in Drinking once again remind me of Peter Dayton, but this time the vocals also have a Mick Jagger lilt to them. If you enjoy all night drinking and subsequent wandering, this song may appeal to you. I like the music, but the lyrics aren't so glorious to me.

The only music from The Suburbs I had known was their 1982 Dream Hog 12inch EP and their biggest hit Love Is The Law. In Combo shows that the band had been putting out good music long before the world started noticing them, and that they still have a place as we look back on the post-punk era or the 80s.

The Suburbs in the gullbuy: